Princeton offers up to $10k for ‘identity and difference’ events

Princeton University is offering students up to $10,000 to run “conversation” events on topics of “identity and difference” through a program called Campus Conversations on Identity (CCI).

Funding opportunities for CCI events take one of two forms: mini-grants of up to $1,000, awarded on a rolling basis; and "signature event" grants of between $1,000 and $10,000. To qualify for the latter category, an event must be a widely publicized public lecture or workshop sponsored by or presented “in partnership with” a department or other unit of the university.

[RELATED: Princeton issues guidelines for ‘consent on the dance floor’]

According to the official program description, CCI was created “to support a series of public programs about identity and difference” in order to “resource opportunities that provide a public forum for productive dialogue; to model honest conversations on a range of complex social issues; and to provide an opportunity for self-reflection and learning about the experiences and viewpoints of others.”

It goes on to explain that CCI-sponsored events “should create a forum for dialogue about the ways multiple aspects of our identities influence our interactions on campus and beyond," with a promotional flyer listing topics such as “concepts of identity,” “intersectionality,” “difference,” “social constructs,” “inclusion,” “solidarity,” “dialogical pedagogy,” and “allyship.” 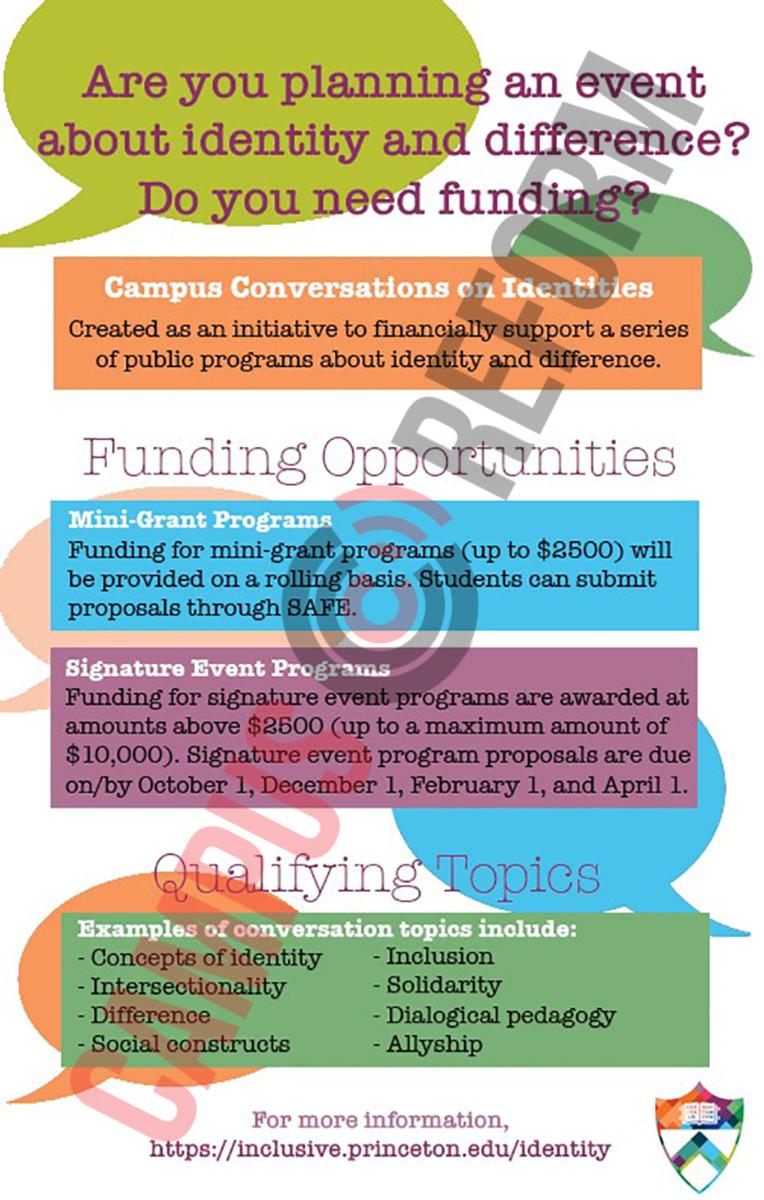 Events funded by the CCI program during the 2016-17 academic year included one on the topic of “Intersectionality in STEM,” a “Black Justice League Student Activism Panel,” and a Northeast Queer and Trans People of Color (NEQTPoC) Conference.

The CCI program is an initiative of the Special Task Force on Diversity, Equity and Inclusion (the Task Force), itself an arm of the Executive Committee of the Council of the Princeton University Community (CPUC).

The Task Force was created in December 2014 after University President Christopher L. Eisgruber charged the CPUC Executive Committee with “developing recommendations for improving University policies, practices, and programming regarding diversity, inclusion, and equity for the campus community.” The Task Force in turn formed a Sub-Committee on Public Programming, which recommended a program in the vein of CCI as part of the Task Force’s May 2015 report to President Eisgruber.

[RELATED: Princeton op-ed: Conservatives have no right to free speech]

The implementation of the Task Force’s recommendations began in 2015 with changes such as the “addition of a senior administrator in the Office of the Vice President for Campus Life focused on diversity and inclusion.”

The Ivy League university also increased staffing and “program enhancement” for its Carl A. Fields Center for Diversity and Cultural Understanding, with the aim to solidify the center as an “effective home base for students of color.”

Additionally, funding was increased for student initiatives, including those run through the Fields Center, the Women*s Center, the LGBT Center, and “identity-based student organizations,” in the form of CCI. Finally, a new Provost’s Fund for Cultural Studies was established to “fill curricular needs in cultural studies fields.”

Campus Reform reached out to both CCI and Princeton’s Media Relations department for comment, but has not received a response from either.