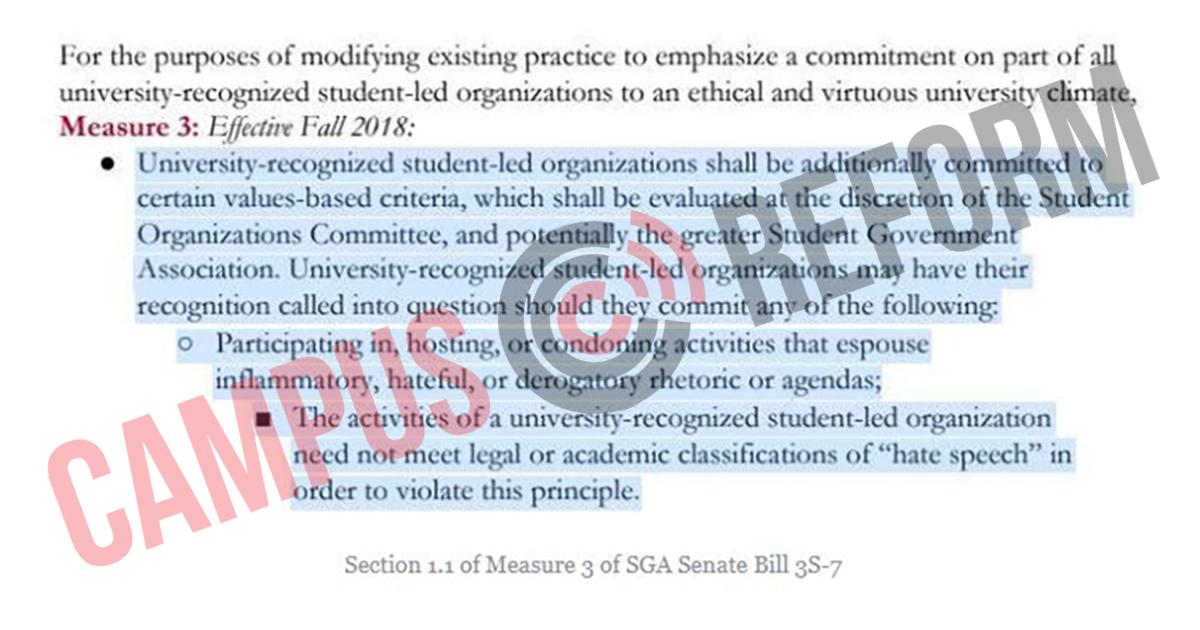 Effective Fall 2018, the Student Government Association (SGA)—which has full power over the budgets and approval of student clubs—stipulates that any student group “may have their recognition called into question” if found guilty of engaging in “inflammatory, hateful, or derogatory rhetoric.”

"This policy could easily be used against any club that the Student Government leadership happens to disagree with at that moment in time."

The rhetoric “need not meet legal or academic classifications of ‘hate speech’ in order to violate this principle,” Senate Bill 3S-7 notes, adding that all student clubs must be “committed to certain values-based criteria” to create a “virtuous” university climate.

Alex Solomon, president of the Rider University College Republicans, views the legislation as a direct attack on conservative and libertarian thought on campus, especially as support for the Republican Party itself is considered “offensive” by many students.

“It is a very dangerous rule to be on the record, one which can be easily abused,” Solomon told Campus Reform in an interview. “This policy could easily be used against any club that the Student Government leadership happens to disagree with at that moment in time.”

Though the bill doesn’t explicitly reference conservatism, Solomon explained that since there are no definitions of what’s considered hateful in the bill, enforcement would be “left open to the interpretation of anyone who is in power at the time.”

This, he said, “would discourage us as a whole from inviting speakers, holding events, and even having open conversations at meetings for fear of what could possibly be viewed as ‘offensive’ by anyone.”

Considering Solomon’s concerns, Campus Reform reached out to SGA president John Modica to learn how the bill would be enforced, but did not hear back.

Last semester, Aminov petitioned the SGA to approve his Turning Point USA Chapter, but the Student Senate voted against him. Aminov will solicit approval from the SGA again on March 20, but he’s still worried about the club’s prospects.

“A refusal to allow us to exist would be a form of suppression against our free speech,” Aminov told Campus Reform.

Campus Reform reached out to Rider University for comment, but did not receive a response in time for publication.