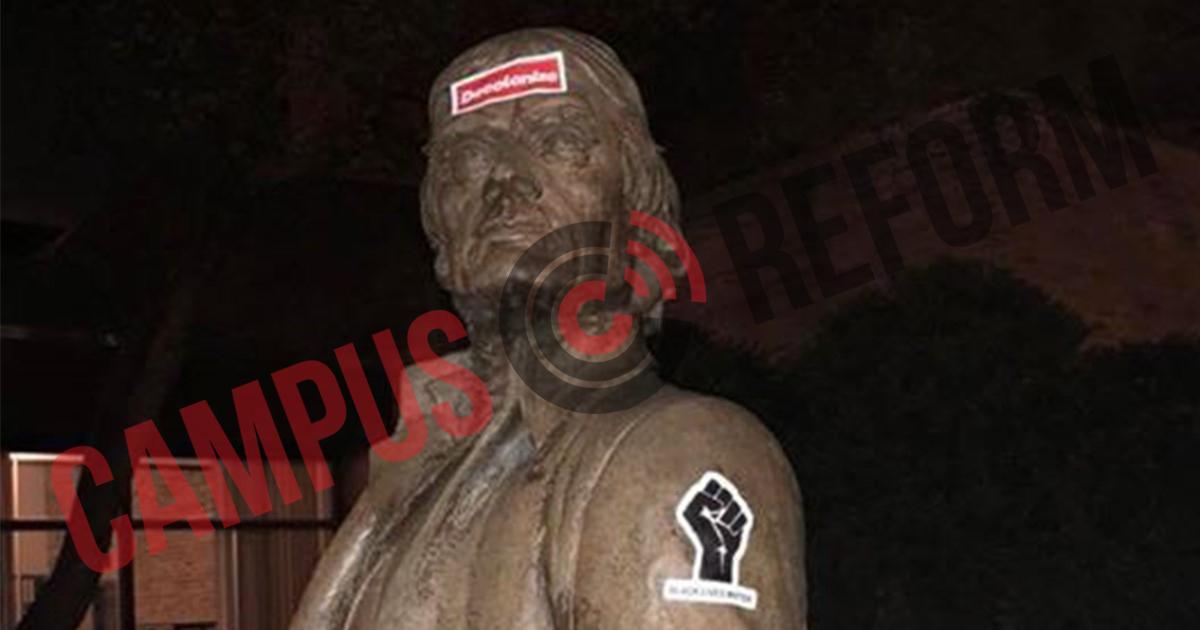 Hofstra University President Stuart Rabinowitz announced that a statue of Thomas Jefferson will remain on campus despite left-wing protests and vandalism.

Rabinowitz acknowledged that Jefferson and other founding fathers were imperfect individuals, but argued that Americans should still honor them for their vision, implicitly rejecting the argument that Jefferson’s role in Westward expansion and ownership of slaves rendered him irredeemable.

"Few of our founding fathers were able to live out the dream they had sketched out, which was the unprecedented vision of a free and equal world."

Students began to protest the Jefferson statue, located in front of the student center at Hofstra’s Long Island campus, after student and Black Lives Matter activist JaLoni Amor released a petition on March 17 calling for the university to remove the statue because Jefferson had become an “icon” of white supremacists.

Amor told Campus Reform that while the statue bothers him, it would be more traumatizing “if I hadn’t gotten used to the routine micro and macroaggressions I’ve dealt with while attending Hofstra University.”

A counter-petition soon gained traction, however, attracting approximately 600 more signatures than the original.

“We live in a world dominated by freedom and Democracy because Thomas Jefferson wrote the document that started it all,” the petition’s author student Richard Caldwell wrote. “To take down this statue of him would be a sad removal of a figure influential in the annals of history.”

On March 30, students on either side of the issue held opposing protests. While conservatives and other students who supported the statue held an American flag near its base, many of those who opposed it chose to remain inside, citing safety reasons and a desire to avoid the press.

Campus Reform obtained a video of the indoor protest from Kenneth Mulvena, a senior at Hofstra.

“Like, all white people, just take a step back, and look at your actions and consider, ‘are you being a shitty white person?’” demanded one student who spoke to the crowd.

Another protester complained that Jefferson “did not give me any rights,” erroneously asserting that “he took them away from me a century before, when America stole Mexico’s land,” even though the Mexican-American War began nearly 40 years after Jefferson’s death.

When pro-statue students called for a dialogue, however, they were shot down with accusations of white supremacy.

Students then defaced the statue with "Decolonize” and “Black Lives Matter” stickers on April 19. The next day, they taped a piece of paper with the words “Black Lives Matter” over Jefferson’s face and defaced the bronze statue with white spray paint. Some of the anti-Jefferson protesters later admitted on social media to taping the piece of paper of the statue’s face.

“I have decided that the Thomas Jefferson statue will remain where it is,” wrote Hofstra’s president, stating that he had reached the decision in consultation with a wide array of community members, and had determined that Jefferson’s personal failings do not obviate his contributions to human freedom.

“Few of our founding fathers were able to live out the dream they had sketched out, which was the unprecedented vision of a free and equal world,” he wrote. “Their words were, in many ways, far ahead of their time and certainly ahead of their actions.

“Yet in the documents most critical to our national character these men of their time laid out a vision of a world in which all people are created equal,” he continued, saying, “It is this vision we celebrate and honor in our Founding Fathers, even as we wrestle with their human and indefensible failings.”

Rabinowitz concluded his announcement by laying out his vision for a task force to examine problematic aspects of American history, including slavery. The task force, which will convene starting in Fall 2018, will consider initiatives such as an academic conference and “potential contextualization for the monuments and art on campus.”