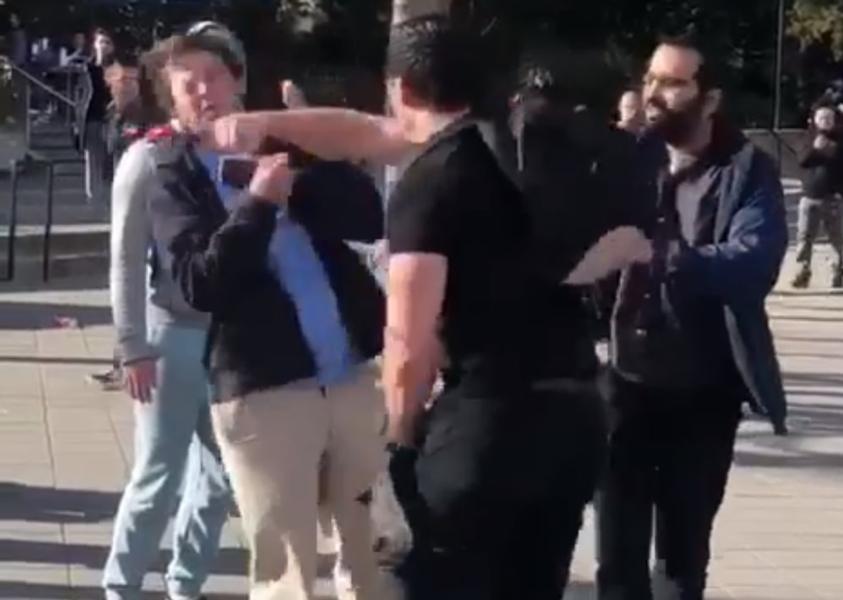 UPDATE: UC-Berkeley Police said Friday they have identified the suspect in this incident but that his name has not yet been released.

“The idea is free speech has consequences.... which include you getting assaulted if they find you promoting ideas others don't agree with."

A conservative helping students recruit at the University of California-Berkeley was punched in the face this week.

Video footage obtained exclusively by Campus Reform shows Hayden Williams,  a Leadership Institute field representative, was punched multiple times by an unidentified person calling him a “racist...b*tch." The Leadership Institute is Campus Reform's parent organization. At the time of the incident, the alleged victim was helping students recruit other conservatives for Turning Point USA behind a table with a sign that read, "hate crime hoaxes hurt real victims,” a reference to the Jussie Smollett case in Chicago.

But at least twice, the situation turned violent and now, police are asking for help in identifying the suspects.

At one point, the same man said he would "shoot" Williams.

A UC-Berkeley spokesman confirmed with Campus Reform on Wednesday that the incident is currently under investigation.

[RELATED: Antifa leader to plead ‘not guilty’ to assault, rioting]

In other footage obtained by Campus Reform, another person, also unidentified, approached the students, claiming they were “encouraging violence.” Williams told Campus Reform that as the physical confrontations took place, a number of onlookers simply watched.

“Some students nearby tabling were laughing, even one guy was smiling while I was being attacked and trying to hand me his flyer as a joke,” the alleged victim said. “The idea is free speech has consequences.... which include you getting assaulted if they find you promoting ideas others don't agree with.”

A student who asked to remain anonymous and was at the scene after the alleged victim got punched said someone also tore apart their signs.

“As I approached the table I could see our TPUSA pins all over the floor, our signs were torn apart, Hayden’s eye was red, and his nose was bleeding,” the student told Campus Reform.

Dan Mogulof, assistant vice chancellor for the Office of Communications and Public Affairs for UC-Berkeley told Campus Reform that while he has not seen confirmation of the assault, he condemns the behavior.

“Let me state in no uncertain terms that this university strongly condemns violence and harassment of any sort, for any reason. That sort of behavior is reprehensible and intolerable,” Mogulof said. “We have, in recent years, spent millions of dollars to ensure that students from across the ideological/political spectrum can safely and successfully promote and discuss their beliefs. Our commitment to freedom of expression and belief is unwavering.”

Mogulof added that if students were involved in the incident, “we will not hesitate to impose serious consequences.” The University of California Police Department later sent an alert to the entire campus asking for anyone who could identify the suspects.

“We very much want to track the perpetrators down,” Mogulof said.

In a separate statement to the Berkeley campus community on Thursday, Chancellor Carol Christ and Vice Chancellor for Student Affairs Stephen Sutton said the following:

Yesterday UCPD sent out a notice and request for information related to a reprehensible incident that occurred on Sproul Plaza earlier this week. According to the police, an unknown, unidentified assailant attacked a Berkeley student engaged in political advocacy. Let there be no mistake, we strongly condemn violence and harassment of any sort, for any reason. That sort of behavior is intolerable and has no place here. Our commitment to freedom of expression and belief is unwavering. At this point we have no information indicating that the perpetrators are affiliated with the university, and I join our police department in urging anyone with information about the incident to come forward so we can apprehend and bring the perpetrator to justice.

I also urge you to read and understand our carefully crafted Principles of Community and trust that they will be a valuable guide to how we should treat our fellow community members.

Bryan Bernys, Vice President of Campus Program at the Leadership Institute released a statement on Friday, after the initial publication of this article, stating the following:

On Tuesday, February 19, one of our employees, Hayden Williams, was violently assaulted on University of California-Berkeley campus while working to recruit conservative student leaders in his capacity as Field Representative for The Leadership Institute.   Hayden was invited to campus by Berkeley students, who were part of the local Turning Point USA chapter.

This event is shocking, but it is not isolated. Conservative and libertarian students have faced violence and intimidation for sharing their political philosophy on campus from coast to coast in this country.  Unfortunately, the Leadership Institute reports on incidents like Hayden’s all too often on our news site CampusReform.org.

Violence has no place in the public policy process -- and it should never be the response to students who exercise their right to free speech. The Leadership Institute calls on The University of California-Berkeley to identify and hold accountable the assailant to the full extent of the law.

But not all took the incident so seriously. As word of the incident spread, social media users began poking fun at the situation.

“[L]ol some MAGA kid tabling on campus got socked in the face,” one tweet stated. “‘this is MAGA country’ lol but they can never seem to defend themselves.” Multiple Twitter users, including some whose profiles state that they are current UC-Berkeley students, liked the tweet. One person, whose Twitter profile states that they are a Ph.D. student, replied to the tweet, writing "beautiful," although it was not clear whether this Twitter user is a Ph.D. student at Berkeley.

LMFAO @ UCPD looking for the dude who smacked that Turning Point asshole.