Ohio professor the latest to be arrested over China ties

A Case Western Reserve University professor has been arrested over his alleged ties to China.

The professor is just the latest in a growing list of U.S. college faculty to face these types of charges.

A Case Western Reserve University School of Medicine professor and former Cleveland Clinic employee was arrested Wednesday over his alleged ties to China.

The Justice Department announced that Qing Wang was arrested at his Shaker Heights, Ohio home as part of a joint operation conducted by the FBI and the  Department of Health and Human Service Office of the Inspector-General. Wang was charged with wire fraud related to more than $3.6 million in grant funding that Wang and his research team at the Cleveland Clinic had received from the National Institutes of Health.

According to the criminal complaint, Wang failed to disclose affiliations with Chinese universities.  He also allegedly failed to disclose that he had received grants from the National Natural Science Foundation of China for a nearly identical research project. He held the title Dean of the College of Life Sciences and Technology at Huazhong University of Science and Technology.

Cleveland Special Agent-in-Charge Eric Smith said this wasn’t “a simple case of omission, " adding that “Wang deliberately failed to disclose his Chinese grants and foreign positions and even engaged in a pervasive pattern of fraud to avoid criminal culpability.”

Wang served on the Staff of the Lerner Research Institute, a research arm of the world-renowned Cleveland Clinic.

Campus Reform found that Wang also held a professorship at CWRU’s School of Medicine, where he was involved with its departments of Molecular Medicine, Genetics and Genome Sciences, and its Division of General Medical Sciences.  He was a member of the Comprehensive Cancer Center located at the Cleveland, Ohio university. 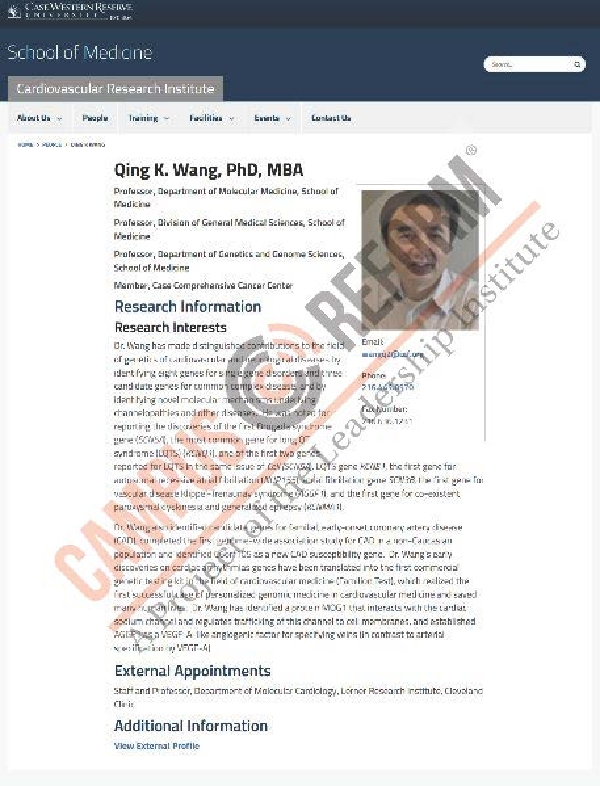 Campus Reform reached out to Case Western Reserve University for comment on the arrest of Wang. The university provided the following statement to WJW-TV: “Like many highly qualified health professionals and researchers who work at our hospital partners, this person held a faculty appointment title but received no compensation from the university.  While this individual was not employed by the university, we are grateful for federal investigators’ dedication to protecting our nation’s exceptional research efforts from wrongdoing.”

Wang is just one of a growing number of professors at U.S. colleges to be arrested over their ties to China.

Campus Reform has been following the cases of professors with alleged connections to the communist regime. To read our full coverage, visit CampusReform.org/China.