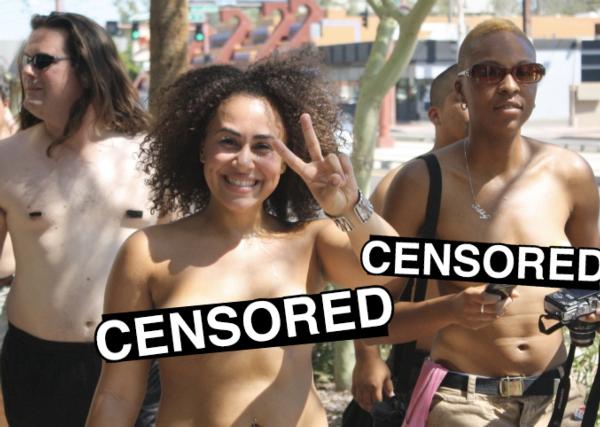 Around 20 protesters took off their shirts and marched along the edge of Arizona State University (ASU) on Sunday to demand a change in state laws which prohibit women from displaying their areolae and nipples in public.

The rally was organized by Go Topless, a project of the world's largest UFO religion, Raëlism, which, according to it’s website embraces “nudity and freedom of expression.”

Protesters on Sunday, marched outside ASU to demand the right to go topless.

“What do we want?” yelled rally organizer Jenna Duffy, according to Lauren Clark, a reporter for the The State Press, an ASU student publication.

The protest was one of dozens organized by Go Topless, in which participants marched in the nude to bring attention to their demands for equal modesty laws for men and women.

While participants in some cities, like Washington D.C., managed to go completely topless, female marchers at ASU wore electrical tape over their nipples in order to avoid arrest. Several men also donned electrical tape and bikinis to demonstrate solidarity with the cause.

Other protesters held signs reading “My nipples are not a crime” and “Free Your T–ies, Free Your Mind”, according to the The State Press.

“It really shows that rights between women and men are unequal,” Duffy told Clark. “A man can take off his shirt and nothing will happen. I take mine off, and I get arrested. To me, that’s significant.”

Raëlism, the world’s largest UFO religion, funds Go Topless and is a vocal proponent of greater sexual freedoms. The religion, was founded in the 1970s by French journalist and race car driver Claude Vorilhon and is headquartered in Geneva, Switzerland.