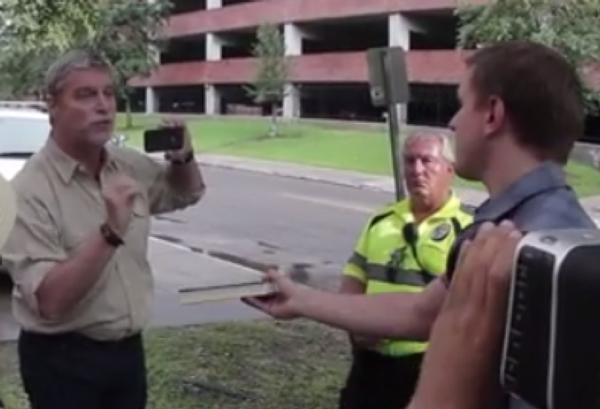 “You are a nasty cowardly little spud, all of you, you're hobbits,” Letten shouted in the video, which was released by O’Keefe’s organization, Project Veritas, on Monday.

“You are less than I can ever tell you,” continued the former-attorney, who briefly lead a prosecution effort against O’Keefe in 2010. “You are scum. Do you understand?”

Letten, who was surrounded by campus security personnel, also appeared to throw a copy of O’Keefe’s book “Breakthrough” back at him, after O’Keefe had handed it over just seconds before.

The Tulane University Police Department then informed O’Keefe that he was being "detained" but did not offer charges, instead pointing to the fact that Tulane’s campus is private property.

It is unclear from the video how the altercation actually began. Letten accused O’Keefe on tape of harassing him and his family but it appears from the video he may have approached O’Keefe and the crew who were already on campus looking to give him a copy of O'Keefe's book.

In 2010, Letten briefly lead a felony prosecution of O'Keefe and colleagues after they were arrested in New Orleans and accused of attempting to sneak into Sen. Mary Landrieu’s (D-La.) office to make recordings.

Letten later recused himself from the case and the charges were lowered to a single misdemeanor for which O’Keefe was found guilty.

In the video, Letten also accused O’Keefe of trespassing on his property and harassing his wife. O’Keefe, however, denied the accusations in the video, showing tape of himself and his crew politely knocking on Letten’s door to give him a book. In the video they left the porch politely when his wife said he was not home. It is unclear if this was the incident to which Letten was referring.

In the video, O’Keefe also points out that Letten’s tirade seems to stand in  contrast with the school’s speech code which calls on members of the community to "speak and act with scrupulous respect for the human dignity of others."