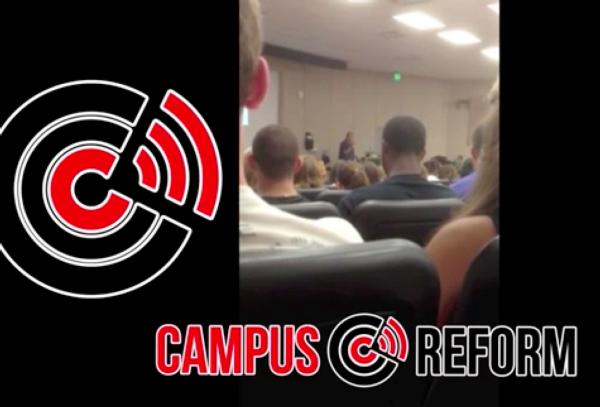 A professor at Michigan State University (MSU) opened the first day of his creative writing class on Thursday by bashing Mitt and Ann Romney and ranting against “old Republicans” who he says “raped” the country, according to a student who made a secret recording of the class.

“If you go to the Republican convention in Florida, you see all of the old Republicans with the dead skin cells washing off them,” said Penn. “They are cheap. They don't want to pay taxes because they have already raped this country and gotten everything out of it they possibly could.”

“They don't want to pay for your tuition because who are you? Well, to me you are somebody,” he continued.

Penn then appeared to harass a student who had apparently displayed displeasure with his politics.

“You can frown if you want,” said Penn, gesticulating towards the student sitting near the front. “You look like you are frowning. Are you frowning?”

Penn, who was a Distinguished Faculty Award recipient at MSU in 2003, and a two time winner of the prestigious Stephen Crane Prize for Fiction, then went on to accuse Republicans of crafting a systematic plan for “getting black people not to vote.”

“This country still is full of closet racists,” he said. “What do you think is going on in South Carolina and North Carolina. Voter suppression. Its about getting black people not to vote. Why? Because black people tend to vote Democratic.”

In a brief conversation with Campus Reform on Tuesday, Penn would not confirm or deny it was him in the recording, which was given to Campus Reform by a current in his student who asked to remain anonymous.

Tom Oswald, a spokesman for MSU told Campus Reform in an email Tuesday, that the university had no further comment on the situation.

“Thank you for reaching out to us," wrote Oswald. "If you’ve already reached out to the professor in this situation, I don’t think we in the university’s central PR office would have anything more to say on this matter."

"MSU is thankful we’ve been made aware of the situation; we will be looking into it. At MSU it is important the classroom environment is conducive to a free exchange of ideas and is respectful of the opinions of others," wrote Kent Cassella, an MSU spokesman in am email to Campus Reform on Tuesday night. Read more...