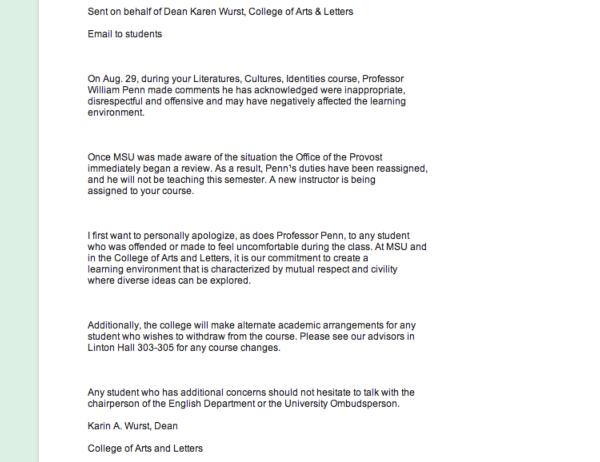 Michigan State University (MSU) administrators have suspended Prof. William Penn from teaching for the remainder of the semester, after he was caught on video going on an anti-Republican tirade on the very first day of his literature class.

Although Penn will not teach again this year, the school will continue to pay his salary, which is $146,510 according to MSU's official website,  a spokesman for the university told Campus Reform on Thursday evening.

In an email to students Thursday morning, Dean Karen Wurst of the College of Arts & Letters, cited his "inappropriate, disrespectful and offensive" comments.

"On Aug. 29, during your Literatures, Cultures, Identities course, Professor William Penn made comments he has acknowledged were inappropriate, disrespectful and offensive and may have negatively affected the learning environment," she wrote. "Once MSU was made aware of the situation the Office of the Provost immediately began a review."

"As a result, Penn's duties have been reassigned, and he will not be teaching this semester," she added. "A new instructor is being assigned to your course."

"As a result, Penn's duties have been reassigned, and he will not be teaching this semester," she wrote. "A new instructor is being assigned to your course."

Administrators took the action in the face of mounting pressure.

By Thursday morning the video had surpassed 70k views on YouTube and received coverage from major national news outlets. For example, the video was briefly played on the O'Reilly Factor on Wednesday evening.

On Wednesday, a member of the MSU Board of Trustees, also told Campus Reform he found the lecture to be "disturbing" and "offensive" and suggested he planned to take it up in a meeting of the trustees scheduled for next month. On Thursday another trustee also condemned the professor's speech.

The eight minute video, released by Campus Reform early this week, showed Penn expressing his political views in the literature class.  In the video he claimed Republicans were “cheap” and “raped” the country.

Campus Reform obtained the video from a student of Penn's who asked to remain anonymous because she/he feared retribution.

The video also appeared to show Penn attacking a student who disagreed with him and alleging the GOP actively works to suppress the votes of African Americans.

In the letter to students, the dean went on to offer an apology for herself, and Penn, who is an award winning faculty member at the East Lansing-based public university.

"I first want to personally apologize, as does Professor Penn, to any student who was offended or made to feel uncomfortable during the class," she wrote. "At MSU… it is our commitment to create a learning environment that is characterized by mutual respect and civility where diverse ideas can be explored."

"He has not been suspended," wrote Jason. "His employment status has not changed; his teaching duties have been reassigned."

Editor's note: This story was updated at 6 p.m. EDT to reflect the fact that Penn will keep his salary.