Prof: Conservatives guilty of 'tyranny' for holding the government 'hostage' 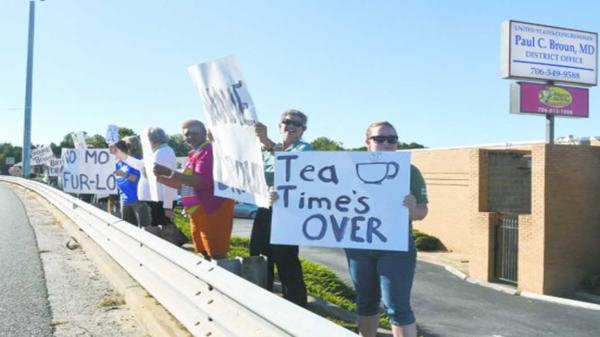 A professor from the University of Georgia (UGA) on Friday told a local paper that conservatives were guilty of “tyranny” for holding the government “hostage” during the budget negotiations.

Prof. Amy Rosemond, from the school's ecology department, made the comments while speaking at the rally she organized outside of Rep. Paul Broun’s (R-GA) office.

“For the next generation, we’ve got to stand again acts of tyranny, where our government is held hostage for negotiations.”

“For the next generation, we’ve got to stand again acts of tyranny, where our government is held hostage for negotiations,” Rosemond told the Athens Banner-Herald, a local newspaper.

“One thing we’ve learning in our democracy is that we can’t negotiate with terrorists,” she added.

In an interview with Campus Reform on Tuesday, however, Rosemond said that she regretted her use of the word “terrorist.”

“I do regret using the word 'terrorist,' because I do not consider anyone a terrorist here, but it's this action of holding the government functioning through the spending bill hostage as part of trying to gain something politically," she said.

"Hostage is the term that could be, to link those concepts," she added.