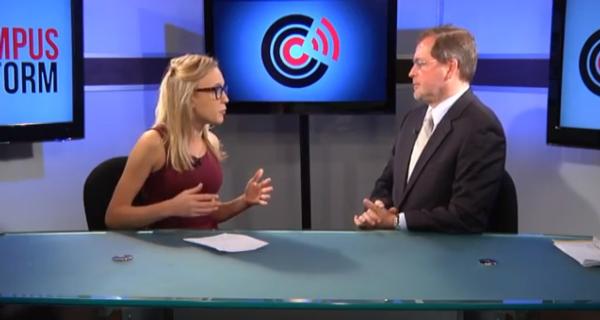 Grover Norquist, the president of Americans for Tax Reform, gave a ringing endorsement of freshly re-elected New Jersey Gov. Chris Christie’s (R) policies on Wednesday suggesting he was ready to support him if he wins the GOP nomination in 2016.

“Chris Christie is obviously one of the six or seven who could run as a successful governor for the Republican nomination,” Norquist told Campus Reform reporter Katherine Timpf in a studio interview on Wednesday morning.

“[G]iven his situation and the state, he has moved mountains and I think will be a strong voice for conservative governance,” he added.

Norquist was responding to a question about the overwhelming support New Jersey youth demonstrated for Christie in Tuesday’s contest.

Norquist argued that conservatives should “grade [Christie] on a curve” because he governs in blue state with a Democratic House and Senate.

“He’s governed well in a difficult state,” said Norquist. “Democrat House, Democrat Senate and yet he got $130 billion in reduction in unfunded liabilities and he took on the teacher unions while everybody understood that he was fighting the unions.

Norquist, is a taxpayer advocate, and the author of the Taxpayer Protection Pledge, which is a congressional commitment to oppose attempts to create a net increase in federal taxes.