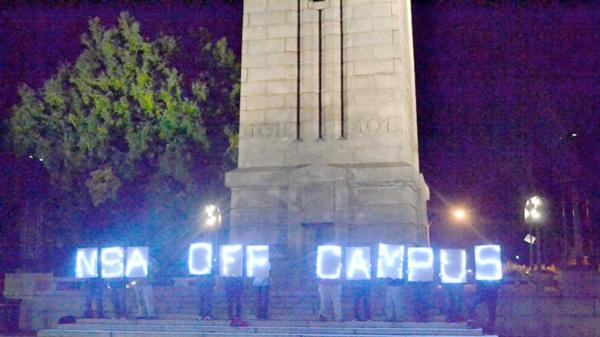 The grant — which created a partnership between the school and the NSA, according to a press release published in August — is the largest research grant in the university’s history according to the Triangle Business Journal.

On Monday, NCSU Students for a Democratic Society taught a workshop on protecting against government surveillance to protest the grant and show their frustration with the NSA’s data collection methods, reported The Technician Online, the official student newspaper of NCSU.

The ‘Crytoparty’ workshop’s more than 30 attendees learned how to encrypt their web browsers, cell phones, and hard drives from privacy invasion.

The students also gathered at the Bell Tower to hold a light brigade which stated “NSA OFF CAMPUS.”

Chancellor Randy Woodson said the University will not evolve into a hub of surveillance for the NSA.

“I think it’s important to understand that we’re a public university,” Woodson said. “So we’re not in the business of operational intelligence, which is one part of what the National Security Agency does, but that’s not what N.C. State will be involved in or what will go on at Centennial Campus.”’

NCSU did not respond to requests for comment from Campus Reform in time for publication.