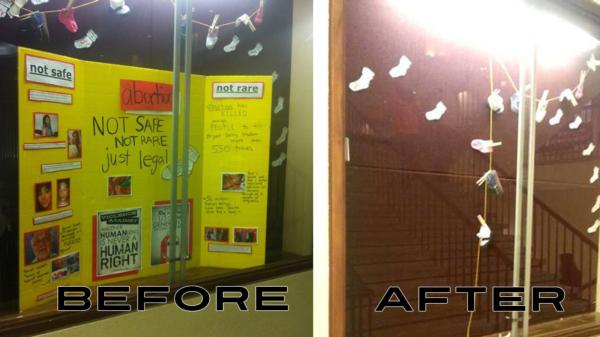 Administrators at the University of Alabama removed a pro-life display from the Ferguson Student Center which they said contained “offensive” material.

The display prominently stated that abortion is “NOT SAFE, NOT RARE, just legal” also noted that “56 million human beings have been aborted since Roe V. Wade.” It also featured a photo of convicted late-term abortion physician Kermit Gosnell along with two small photos of aborted babies.

“You guys were lucky to get it up there as long as you did.” - Donna Lake, Event Coordinator at the University of Alabama

Claire Chretien, President of Bama Students for Life, told Campus Reform that administrators “arbitrarily removed” the display because it offended a few students.

Bama Students for Life put the display up on Jan. 17. On Feb. 6, Chretien checked on the display only to discover that it had disappeared from its case. Chretien approached Student Center Event Coordinator Donna Lake and asked why the display was removed.

“No offensive or graphic material” Lake said in the conversation, which Chretien filmed. “You guys were lucky to get it up there as long as you did.”

However, as The Alliance Defending Freedom reports, the university’s display case policy fails to mention anything about offensive or graphic content.

U. of Ala. removes "offensive" pro-life display from ADF Media Relations on Vimeo.

Chretien told Campus Reform she was confused about the removal of the display, claiming the university has previously allowed posters featuring full frontal male nudity and bloodstained movie advertisements.

“Who defines what is and is not offensive?” Chretien asked.

Chretien said her group was optimistic that the university would issue an apology and take corrective action.