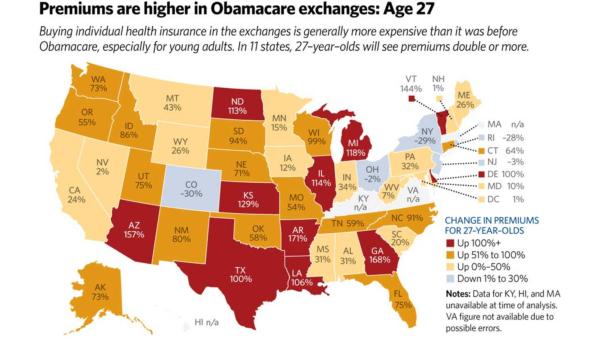 Those in Georgia will see the highest increase at 168 percent, followed by 157 percent in Arizona and 144 percent in Vermont.

The study was conducted based on data from healthcare.gov and state-run exchanges from October 2013.

The Affordable Care Act (ACA) requires all Americans to have health insurance or else pay a penalty.

The White House has said it needs at least 40 percent of enrollees to be young, healthy people in order to offset the cost of insuring older, sicker ones.

The Obama administration and supporting groups went to great lengths to convince young people to enroll before the March 31 deadline, such as offering cash prizes through sweepstakes, instructing commencement speakers to promote it at college graduation ceremonies and a White House youth summit which advised attendees that they would need the coverage in case they hurt themselves at a “YOLO party.”

According to a recent national study, 80 percent of 27-year-olds are in debt.