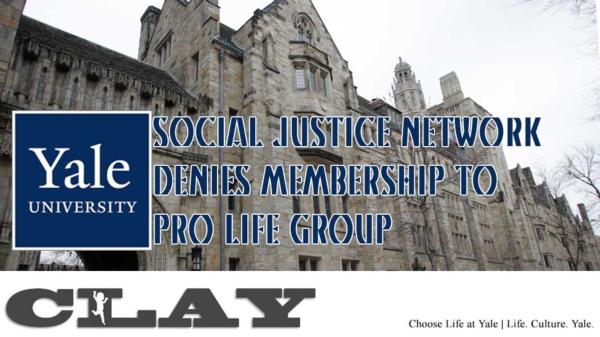 Choose Life at Yale (CLAY) has become the first group in history to be denied full membership in the school’s Social Justice Network (SJN) of Dwight Hall.

CLAY had been a “provisional member” of the network for the past year, during which time the group raised money and volunteered extensively for Dwight Hall at Yale, a non-profit organization which aims “to foster civic-minded student leaders and to promote service and activism in New Haven and around the world,” according to its description on the college’s website.

“It was kind of just like the nail in the coffin saying she and Dwight Hall did not respect us enough to be unbiased.”

But despite CLAY’s fundraising and service, the Dwight Hall Cabinet voted Wednesday night to deny CLAY full membership, blocking the group from further access the hall’s resources such as funding, vehicles and meeting spaces.

Dwight Hall co-coordinator, junior Teresa Logue, claimed that she was very careful that political bias not interfere with the group’s decision — despite wearing a “Yale feminists” T-shirt to the vote.

“It was my understanding that she wore the shirt to put her stance forward that CLAY didn’t belong in Dwight Hall,” CLAY President Courtney McEachon told Campus Reform in an interview on Friday.

“It was kind of just like the nail in the coffin saying she and Dwight Hall did not respect us enough to be unbiased,” she added.

Before the vote, Andre Manuel, chair of the Yale chapter of the American Civil Liberties Union, an SJN group, wrote an opinion piece advising against allowing CLAY into the network because it would “divert funds away from groups that do important work pursuing actual social justice.”

Among the member groups is the Roosevelt Institution at Yale, which “delivers progressive proposals to policymakers.” There is no conservative policy proposal group.

CLAY has not decided whether it would continue to pursue membership in the network.

SJN did not respond to requests for comment from Campus Reform.