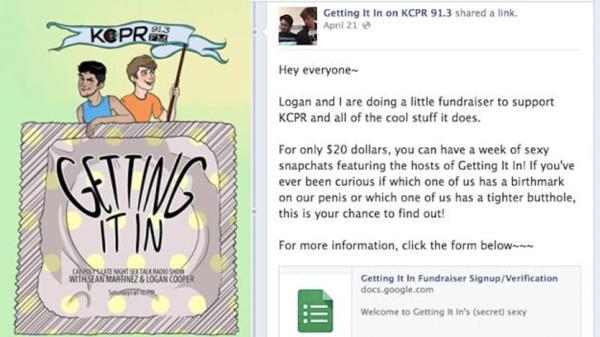 Student hosts of a California Polytechnic University sex talk radio show offered to send pictures of their genitals and anuses to listeners who donated $20 in cash to the station.

“For only $20 dollars, you can have a week of sexy snapchats featuring the hosts of Getting It In!,” stated a post on the show’s Facebook page.

Both the show’s Facebook page and Twitter account have since been deleted, and Cal Coast News reports that the show has been taken out of KCPR’s lineup.

The hosts, juniors Logan Cooper and Sean Martinez, launched the event in late April — but the journalism department did not find out about it until last week, according to an article in Mustang News, the official student newspaper.

Cal Poly student Aaron Bandler, who is involved in the journalism department as a reporter for the News, told Campus Reform that most students on campus know about the fundraiser and are disgusted by it.

The amount of money the students raised by selling the sexual pictures remains unknown.

Mary Glick, the chair of the journalism department, said the school has launched an investigation into both the fundraiser and the “long-term structure” of the station in general.

The show aired Saturday nights and covered topics including how to ask for oral sex and how to experiment with the same sex.

Cal Poly’s journalism department did not respond to requests from Campus Reform in time for publication.