Quinnipiac: Obama voted 'worst president since WWII,' America would be better with Romney 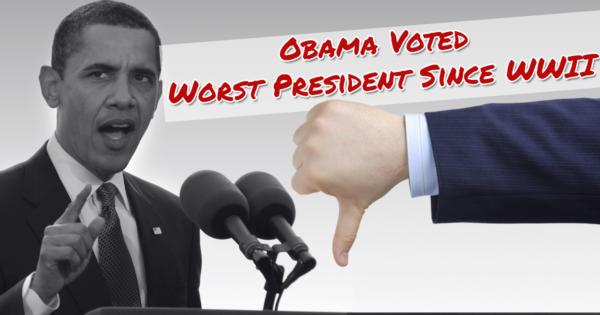 Americans say that President Obama is the worst president since World War II according to a new poll from Quinnipiac University.

Obama received 33 percent of the votes for the worst president, beating out his predecessor, George W. Bush, by five percent.

"Would Mitt have been a better fit? More voters in hindsight say yes."

"Over the span of 69 years of American history and 12 presidencies, President Barack Obama finds himself with President George W. Bush at the bottom of the popularity barrel," said Tim Malloy, assistant director of the Quinnipiac University Poll.

According to the poll, the most important issues facing the country today are the economy and jobs, with 35 percent of the votes. Yet Obama has a 55 percent disapproval rate on his handling of the economic situation, with 77 percent saying that the economy is either ‘not so good’ or ‘poor’.

The poll shows that a plurality, 45 percent, believe the country would be better off if Romney had won the 2012 election.

"Would Mitt have been a better fit? More voters in hindsight say yes,” Malloy states.

The Quinnipiac poll states that Ronald Reagan is the best president since WWII with 35 percent of the vote.