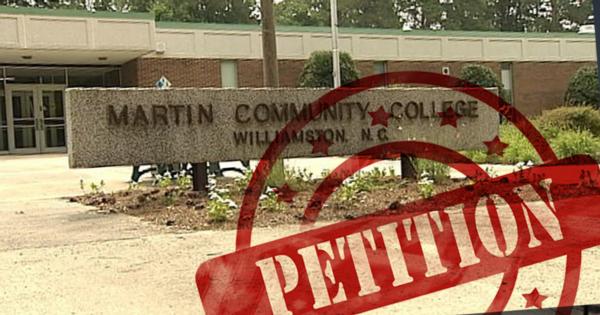 More than half of the Martin Community College (MCC) student body has signed a petition urging the school’s trustees not to renew the contract of its current president, Dr. Ann Britt, on the grounds that she has become apathetic and allowed the school to fall into disrepair.

Students charge that Britt, MCC’s president for over a decade, has allowed MCC to fall into a “catastrophic state [in which] immediate attention is necessary to re-establish its integrity and purpose,” according to an anonymous letter sent to the president of the North Carolina community college system and local media outlets.

"She is a southern LADY!"

Students complain of a litany of offenses in a 10-page letter, including moldy chairs, moldy spirit wear, lack of ventilation in science labs, and frivolous spending. According to the letter, MCC has no deans as of July 1 because she refused to renew contracts for the dean of administration and dean of continuing education.

The letter charges that Britt created a hostile work environment in which employees feel threatened and intimidated if they do not agree with her. The letter also outlines salary discrepancies with veteran employees making considerably less than their recently-hired subordinates.

Britt has also allegedly manipulated student activity fees, which are approximately $19 per semester per student and used forMCC Student Government Association (SGA)functions and events, for purposes thatviolate the SGA’s guidelines. Over the past two years, Britt has supposedly spent over $27,500 for supplies, gifts, entertainment, and miscellaneous items without the permission of SGA officers. When officers asked for requisitions or invoices for expenditures, they apparently never received them.

The letter says that Britt creates the SGA budget each year and presents it as if it were student-made. The budget includes spending on campus-wide wireless services, cable, student insurance, and the school’s participation in a local Christmas parade. When SGA officers repeatedly asked to allot unused SGA funds towards programs that students would enjoy, Britt allegedly stonewalled and claimed that students would not enjoy the proposed events.

“Personally, she really doesn't know her students,” said Brandy Jess, president of MCC’s SGA, who also serves as an ex-officio member of the MCC Board of Trustees.

A response letter, written by another anonymous group, defends Britt. The authors call the whistleblowers “people who have nothing better to do than make trouble!”

“It is a shame that we find secret supper clubs and [send] anonymous letters to our community,” states the rebuttal.

The rebuttal argues that Britt is very transparent because “[she] and staff/faculty copy each other on emails and frequently conference call.” It further explains that Britt would not confront any employee in a threatening manner because, “[t]his is simply not how she operates. She is a southern LADY!”

Britt said she cannot comment on the allegations until she speaks with a lawyer. Jackie Gillam, CMM’s Board Chairman, said the State Auditor’s office is looking into the allegations.

“Martin Community College Board of Trustees is aware of all the allegations regarding the leadership of Martin Community College. The Board leadership has discussed with the President and other appropriate individuals. We have already begun the process of having an investigation into these allegations by external authorities including the Office of the State Auditors,” said Gillam.

According to WNCT, MCC would have operated at an $8 million loss last year if not for revenue sources like $4 million in state aid and $1 million in county appropriations.

MCC reports on its website that it did not meet four out of seven state performance standards in 2012.