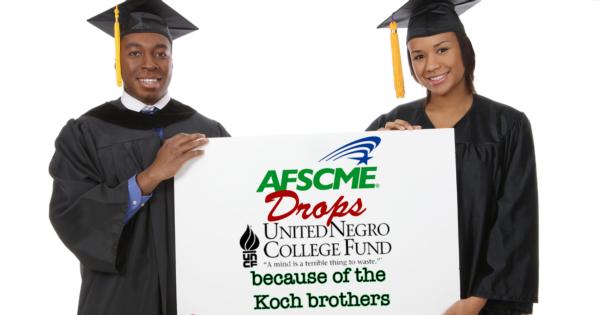 The United Negro College Fund (UNCF) has been dropped from one of the nation’s largest public service employees union because of its relationship with the Koch brothers.

In a letter written last Tuesday, the American Federation of State, County and Municipal Employees (AFSCME) claimed that it must “sever” its partnership with UNCF because of the UNCF President Dr. Michael Lomax’s “personal support and the UNCF’s organizational support of the Koch brothers’ ideological program.”

"[I]f I've got to bear the brunt of someone else's criticism to ensure that we have the resources to help those students, then I can handle it."

Lee Saunders, the President of AFSCME, claims that the Koch brothers "have devoted themselves for more than a decade to attacking the voting rights of African Americans” and that they are “the single most prominent funders of efforts to prevent African Americans from voting.”

Lomax defended his decision to accept the donation by claiming that a students’ education should be prized above all else.

"Criticism is a small price for helping young people get the chance to realize their dream of a college education, and if I've got to bear the brunt of someone else's criticism to ensure that we have the resources to help those students, then I can handle it, and I can take the heat," Lomax said.

While Saunders disapproved of UNCF accepting the donation, it was Lomax’s presence at a summit hosted by Charles and David Koch in California, which Saunders deemed “a betrayal of everything the UNCF stands for,” that prompted the dismissal.

According to an AFSCME spokesman, the union has provided approximately $50,000 to $60,000 to the program annually for the past 11 years.

This program will be suspended on September 1 because of UNCF’s expulsion.

A UNCF spokesman told BuzzFeed that the organization is “saddened by AFSCME’s decision, it will not distract us from our mission of helping thousands of African American students achieve their dream of a college degree and the economic benefits that come with it.”