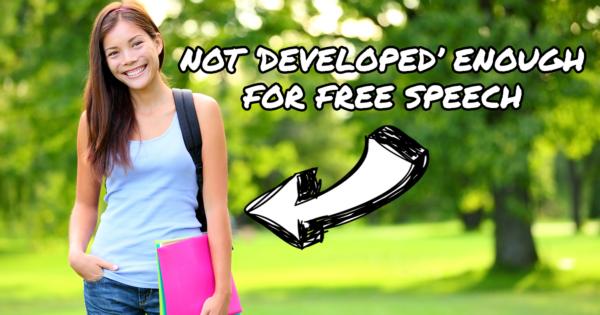 During the briefing, Yaki said hostile environments on college campuses can occur from fraternities holding “slave auction[s]” or celebrating Latino culture by “making everyone dress as janitors and mop floors.”

“Certain factors in how the juvenile or adolescent or young adult brain processes information is vastly different from the way that we adults do,” Yaki said according to a transcript from Eugene Volokh, a law professor and publisher of the blog, The Volokh Conspiracy, who also testified at the briefing. “So when we sit back and talk about what is right or wrong in terms of First Amendment jurisprudence from a reasonable person’s standpoint, we are really not looking into the same referential viewpoint of these people, of an adolescent or young adult, including those in universities.”

Yaki made these claims while questioning Greg Lukianoff, the president of the Foundation for Individual Rights in Education (FIRE), a nonprofit organization advocating for civil liberties in higher education nationwide.

A spokesperson from FIRE declined to comment to Campus Reform as the USCCR has requested the organization wait to make any media comment until after the official transcript from the briefing is released.

“In the meantime, I would point you to the Twenty-Sixth Amendment, which extended the franchise to 18-year-olds. FIRE has long argued that if college students can vote and can even be sent off to fight in wars, we must grant them full political rights—and that prominently includes their First Amendment rights,” Robert Shibley, senior vice president at FIRE, did tell Campus Reform.

During the briefing, Yaki said hostile environments on college campuses can occur from fraternities holding “slave auction[s]” or celebrating Latino culture by “making everyone dress as janitors and mop floors.” Yaki also decried campus pageants and other activities in which women “parade around in skimpy clothing and turn in some show or something.”

“[B]ecause of the unique nature of a university campus setting, I think that there are very good and compelling reasons why broader policies and prohibitions on conduct in activities and in some instances speech are acceptable on a college campus level that might not be acceptably say in an adult work environment or in an adult situation,” he said.

Yaki told Campus Reform in an email that he uses briefings as “opportunities to pose questions that help me understand the challenges of the issue” as it “helps clarify—or solidify—or highlight—the difficulty of grappling with a particular issue.”

Yaki also told Campus Reform that he has considered himself a “First Amendment absolutist” for much of his life.

“If there is a way to strike a balance between First and Fourteenth Amendment rights, it will have to [be] done with great restraint and narrowly tailored to pass constitutional muster,” he said. “Frankly, I haven't seen one, and imposing a prior restraint policy w [sic] punishment plainly violates the First Amendment.”

“[H]ow do we work to increase the safety and security, both mental and physical, of all our students in a way that doesn't require infringing on the First Amendment,” Yaki said. “That is the million dollar question that, to me, the briefing was intended, and which more thought and work needs to be done.”

Prior to working as the Civil Rights Commissioner, Yaki was a senior advisor to Rep. Nancy Pelosi (D-Calif.) and also served on San Francisco’s Board of Supervisors where he was subsequently sued by the city for around 70 instances of illegal lobbying.