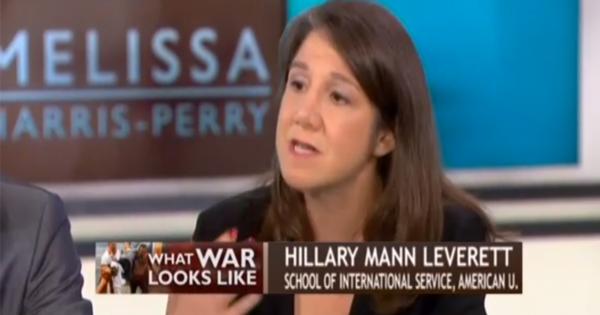 The Senior Adjunct Professorial Lecturer at the School of International Service recently appeared on MSNBC and claimed that since she has personally seen a Jewish hospital and kosher restaurants in Iran, the idea that anti-Semitism exists in the Middle East is false.

However, a recent worldwide survey from the Anti-Defamation League on global anti-Semitism shows that the majority of the most anti-Semitic countries and territories are in the Middle East.

The top 10 worst countries for anti-Semitism among inhabitants include: the West Bank and Gaza, Iraq, Yemen, Kuwait, Bahrain, and Jordan.

Morsi made multiple public speeches, urging Egyptians to “nurse our children and grandchildren on hatred” for Jews and Zionists while Ahmadinejad referred to the Holocaust as a myth.

According to Leverett’s faculty page, her research primarily focuses on “[p]olitics and international relations of the Muslim world, U.S. foreign policy toward the Middle East, Persian Gulf, and Asia, diplomacy, international negotiation, and conflict resolution.”

The foreign policy professor is a Fulbright Scholar as well as a Thomas J. Watson Fellow, and has made multiple media appearances regarding Iranian politics.