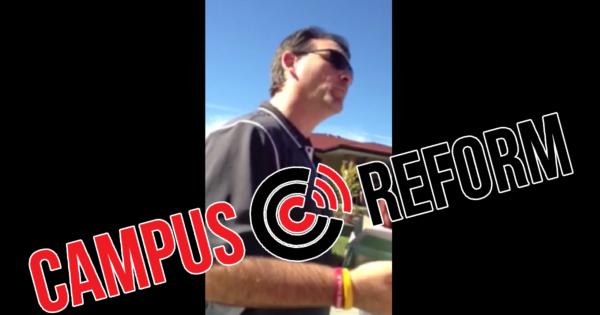 University officials threatened to call the police and disciplinary action against students who were passing out copies of the U.S. Constitution at Southern Oregon University (SOU) last week.

A group of four students at SOU handed out copies of the Constitution on campus Tuesday while collecting signatures to end the university’s restrictive speech policies, which limit free speech to an area that totals less than one percent of campus. While doing so, the students were approached multiple times by school administrators and campus police who all asked the students to move to a different area of campus.

"We encountered wild accusations that because the event was affiliated with SCC, there was legitimate fear for the imminent danger of students on campus."

“I would very much like you to leave, if you would, please, because the students have the right to be able to come by here without you guys, you know, invading their space and asking them to do something,” Tim Robitz, director of university housing, can be heard telling the students in an exclusive video obtained by Campus Reform.

“We have our free speech zone. I understand that you may not like it, but that’s where it is,” Allyson Beck, SOU’s family housing coordinator, told the students in the video.

The four students are affiliated with Students for Concealed Carry (SCC), a nonpartisan student organization that advocates for concealed carry rights on college campuses.

“We encountered wild accusations that because the event was affiliated with SCC, there was legitimate fear for the imminent danger of students on campus,” SCC member Stephanie Keaveney told Campus Reform after the incident. “Administrators accused us of causing an immediate panic for the safety of students in the face of gun violence, or the promotion of such.”

Campus police did inform the group that they had received a complaint from another student who said he felt uncomfortable, although members of SCC told Campus Reform that not a single student complained to them.

“[S]tudents on this campus were in no way framing themselves to be a legitimate threat to safety or inciting unlawful behavior,” Keaveney said. “This action was only related to SCC in that its members on this campus believe in order to fight for our second amendment rights; we must first be free to exercise our first amendment rights.”

Besides asking the group to move to the designated free speech zone, SOU officials asked the students to make sure they were explaining to their peers why the free speech zone exists in the first place.

“Well I just think if you’re going to ask someone to sign a petition, it’s always helpful if you’re explaining both sides of the petition--why the policy exists is certainly useful as opposed to saying ‘we want this,” Robitz can be heard telling the students in the video.

While Robitz did tell the students he would be willing to sit down and have a conversation about SOU’s speech policies, but that “doesn’t necessarily mean [he] supports doing it.”

“If you’re asking me if I support it, I don’t think I could say yes or no at this point because clearly there’s a number of reasons why it exists and I think we need to look at all those--good, bad, and indifferent--because it’s not just about the free speech of students,” Robitz told the students in the video. “When you open it up to free speech that means anyone anywhere can come on here and do that and that might create some other challenges for this campus that we’re not prepared to manage.”

Students were handing out the free Constitutions in what SOU considers a “residential area” because of its close proximity to residence halls. The four students didn’t have a table and stayed on a sidewalk which led to a main road.

“Caging students in censorship zones flies in the face of the First Amendment and undermines the reason for education,” David Hacker, senior legal counsel for the Alliance Defending Freedom, told Campus Reform. “Colleges and universities are and should be the marketplace of ideas, and the Constitution protects the speech rights of everyone, not just groups or students that a few university officials personally choose.”

Keaveney confirmed to Campus Reform that city police never approached the student group or asked them to leave. She also said that so far the university hasn’t taken any action against the students despite the threats to the contrary.

“While it is lawful for the university to maintain policies prohibiting activities which genuinely disrupt the educational process, restricting speech as acutely as SOU has by instituting and upholding the free speech zone is grossly more broad than necessary to ensure the educational process is not interrupted,” she said.

Neither Beck nor Robitz responded to a request for comment from Campus Reform.

A university spokesperson did confirm to Campus Reform that the incident took place but did not say if the students would be further disciplined.

Another view of the incident:

UPDATE: In an email Tuesday afternoon, SOU confirmed to Campus Reform that it has no plans to further discipline the students.