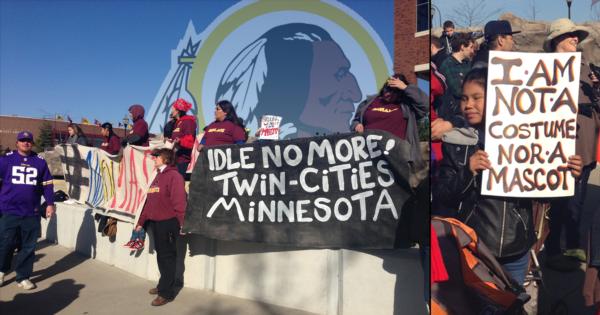 University of Minnesota (U of M) students heckled Washington Redskins fans in front of TCF Bank Stadium before the game against the Minnesota Vikings on Sunday.

U of M students from the American Indian Student Cultural Center (AISCC) held signs that said “American Genocide Reconciled Thru Football” and “Culture Not Costume.” They wore shirts that changed the name “Redskins” to “replace” and “rethink.”

Thousands of protesters harassed fans who were wearing Redskins’ jerseys, calling them “bigots,” as they walked by and giving them the middle finger.

Thousands of protesters harassed fans who were wearing Redskins’ jerseys, calling them “bigots,” as they walked by and giving them the middle finger. While some fans would defend themselves, most ignored the name calling and kept on walking.

“The people united can never be defeated,” protesters chanted. “Change the name.”

The Vikings will be playing at the U of M’s stadium for the next two seasons while their new stadium is being built in downtown Minneapolis. In August, the university’s president, Eric Kaler, worked with the Vikings to try to get the Redskins name and logo banned from campus for the November game.

A few weeks ago, the Minnesota Student Association passed a resolution supporting the university’s attempt to ban the name and logo from campus, and supporting the AISCC’s protest of the game.

“This is game over for Dan Snyder,” one protester said to the crowd. “He cannot tell us what is racism and what is not racism. That is our choice. He’s a corporate sponsor. He’s a corporate pig. He don’t care about us.”

According to the Washington Post, organizers estimated around 5,000 protesters were in attendance Sunday afternoon. U of M police said between 3,500 to 4,000 people protested.