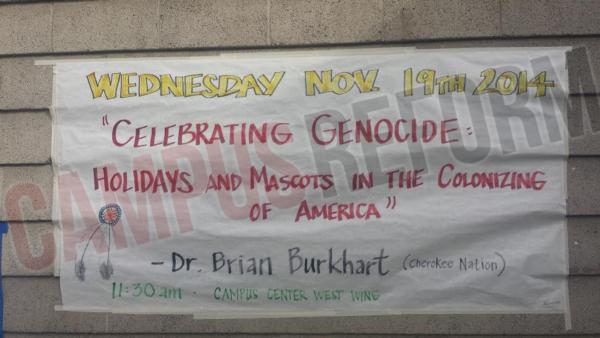 Thanksgiving is a testament to genocide, according to the Native American Student Association (NASA) at Citrus College.

Brian Burkhart, assistant professor and director of American Indian studies at California State University Northridge will be the keynote speaker for the event.

The two part event includes a lecture on the meaning of Thanksgiving, how the holiday paints Native Americans as victims of white oppression—and a discussion surrounding mascots like the name of the Washington Redskins NFL franchise.

“It is shocking that something as family oriented as Thanksgiving is being turned into a talking point for leftist political gain,” Stephanie Miranda, a student at Citrus College, told Campus Reform.

Last year, NASA hosted a similar event criticizing the United States and white settlers to a room of roughly 300 students. This year's discussion shows only 17 confirmed guests on the event's Facebook page.

The “Celebrating Genocide: Holidays and Mascots in the Colonizing of America” event is scheduled for Nov., 19 inside the Citrus College Student Center.