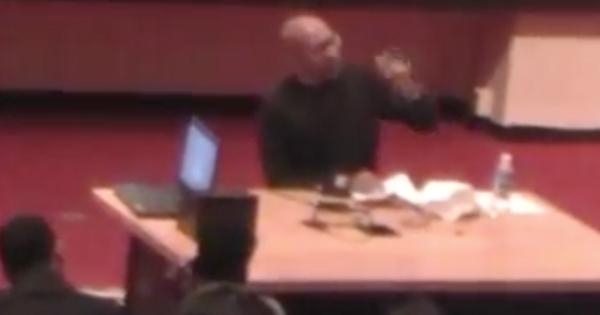 An assistant professor at Cornell University (CU) told white students they must commit race suicide and reject the inherent privilege of their skin color to move past the events in Ferguson.

Russell Rickford, an assistant professor specializing in black radical tradition and black political culture after WWII, discussed the events surrounding Ferguson, Mo. to a packed auditorium of students on Wednesday. Casey Breznick and the staff of Cornell’s conservative student paper, The Cornell Review, videotaped the event, titled “Ferguson: The Next Steps”

"They’re ready to perform treason to whiteness, as an expression of their loyalty to humanity."

Up to that point, Rickford had primarily spoken on the country’s treatment of minorities and the poor, and how police were “mercenaries for the corporations and the rich.”

“We attempt to negotiate with a system that has demonstrated time and time again its utter disdain for the sanctity of black lives,” Rickford declares at 8:32. “Not only its disdain, but its deep commitment to the slaughtering of black and brown people.

“Let’s be very clear about what is going on. One every 28 hours, dead black bodies in the street is a sacrifice America makes to the gods of white supremacy. Yet, the petite bourgeoisie, including black and brown folks stands [sic] on the sidelines mumbling, asking white supremacy to please crack fewer hits.”

Rickford believes that America’s disciplinary tactics for those who practice their “human right to revolt against fascism,” as he claims relevant in the Ferguson case, is repressive to the poor and those with black or brown skin.

“The propertied classes leverage state violence to discipline, repress, and contain them. America fears and despises all poor people,” Rickford says at the 10:07 mark in the video. “But it reserves a special hatred, a distinctive form of violence for poor black and brown people. Poor black and brown people are the primary victims of American capitalism but they are not just victims. Many of the people who have taken to the streets in Ferguson for example, are exercising their human right to revolt against fascism.”

Rickford also argued that “white supremacy as a system is inextricable from the system of capitalism, imperialism, militarism, and the systems of the carceral-state mass imprisonments,” and rallied students to stand up to America’s corrupt authoritarian regime.

“The statement ‘fuck the police’ is one of the most astute, honest and meaningful responses to the events in Ferguson,” the professor says at 12:11. “Fuck authoritarianism and white supremacy. This is uncompromising politics, the politics of resistance.”

The professor continued to refer to the police as terrorists.

“We’re charging genocide. We’re charging genocide,” Rickford says a few minutes later. “This is a question of human rights….when you cannot walk down the street as a black person without the threat of being attacked by terrorists, that’s a violation of your humanity, that’s a violation of human rights. You’re being treated as subhuman. And you know that Darren Wilson said of Mike Brown, ‘it looked like a demon.’”

Campus Reform spoke to Breznick, the editor-in-chief of the Cornell Review, regarding the event.

“I disagree with everything he says, but I'm trying now to understand what he is saying. The thing you have to know about Rickford and his ilk is that they are operating within a totally different paradigm of thought,” Breznick wrote in an email response to Campus Reform. “They view the world in terms of race and class.

Professor Rickford has a history of being controversial. In January, he claimed that Martin Luther King Day was a far-right imperialist holiday and led students at a “ Stop Police Brutality” protest this past September.

Rickford did not respond to Campus Reform’s request for comment.