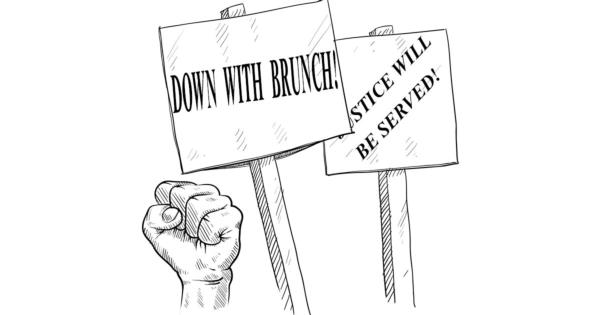 Student activists from the University of California, Berkeley hosted a Black Brunch protest Saturday morning, storming into restaurants with signs and megaphones and reading the names of black Americans who have died in police confrontations.

The protest was organized by Berkeley’s Black Student Union (BSU) in light of last year’s controversy surround the deaths of Michael Brown and Eric Garner. The march began at 11 a.m. and had around 30 participants, according to The Daily Californian, the school’s independent student newspaper.

“The small inconvenience felt while we disrupted businesses pales in comparison to the nightmarish reality of being Black in America.”

“I know that black people are naturally soldiers,” Ariel Hollie, a junior at UCB told The Daily Californian. “It doesn’t matter if we’re on break or in school. People who aren’t here physically are here spiritually — the momentum won’t be lost.”

In a press release issued by the BSU, members explained that their goal was to target upscale businesses such as the Apple Store and Peet’s Coffee & Tea, to “stop business as usual,” and to impress upon patrons the struggles of black America.

“The small inconvenience felt while we disrupted businesses pales in comparison to the nightmarish reality of being Black [sic] in America,” read the press release.

The protesters initially congregated in front of the Berkeley Amtrak station before marching through the town. They eventually gathered in the middle of a shopping center where Berkeley junior Blake Simons read aloud his experiences with Berkeley police, asserting he has been targeted because of his race.

“I show my Cal Berkeley ID, and soon he lets me be free,” read Simons. “No ticket, no warning — it’s like he pulled me over just for fun.”

This is not the first time Berkeley students have caused local disturbances. In fact, the students have been at the forefront of Ferguson protests, blocking highways, stopping trains, and organizing marches from Berkeley to Oakland.

Similar protests took place in New York City and Oakland, California over the weekend and were highly publicized over social media with the #BlackBrunchNYC and #Oakland2NYC hashtags. Protesters read aloud statements such as “every 28 hours a Black unarmed civilian is murdered by the State [sic]. This is why we disrupt.”

The protesters in other cities said they stormed restaurants they considered to be predominantly “white spaces.”

Neither Berkeley, nor the BSU responded to Campus Reform’s request for comment.