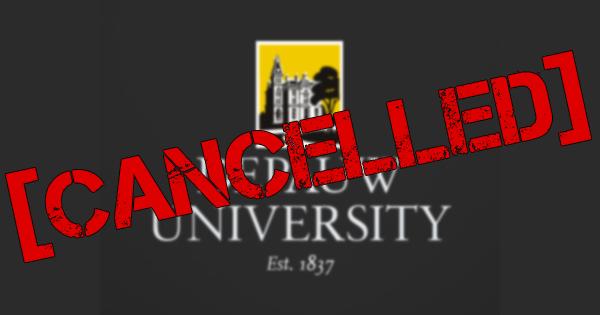 For the first time in more than 100 years, DePauw University cancelled class in order to hold a social justice workshop.

On Wednesday, around 2,000 students at the private school in Indiana gathered for a “DePauw Dialogue” to discuss “microaggressions” against minorities at the school.

"If we want to end racism, this conversation needs to be mandatory for all of us."

“We have to understand that we are in the midst of a national movement,” DePauw President Brian Casey said, according to The DePauw, the university’s student newspaper.

Similar efforts have been under way at other higher education institutions, including Notre Dame, Casey’s alma mater. The event, which was initially presented to the students as a prerequisite for registering for fall classes or walking at commencement, became optional after faculty voiced concerns that it had become a graduation requirement without a faculty vote.

Derald Wing Sue, a Columbia University professor, said that he has faced microaggressions as an Asian-American, such as when someone asked where he was from or telling him that he had “excellent English.”

Sue said that although these people might have had good intentions, their statements were filled with stereotypes.

Discussion throughout the day was centered primarily on racial microaggressions, which some saw as a lack of comprehensiveness.

“I didn’t go because I was led to believe, from an email I sent to [Vice President for Student Life] Christopher Wells, that the day would only be about racial inclusion,” sophomore Sarah Proctor told The DePauw. “It’s not that I don’t believe that the day is a good idea. I just think to have a true day of inclusion you have to include all minority groups on campus, not just the ones who are the loudest or the biggest.”

Proctor said that she had been basically been "told that the multicultural community is important enough to get a whole day and that other groups are only an afterthought."

Author Tim DeWolf, who also spoke at the conference on his book Gather at the Table, said such dialogue was needed.

“If we want to end racism, this conversation needs to be mandatory for all of us,” he said.

Executive Director of Media Relations at DePauw, Ken Owen, told Campus Reform that “[t]his was an event to bring people together. It had no serious overtones claiming that it wanted to change others.”

Owen also mentioned that DePauw has brought a wide variety of people to talk on campus on variety of issues.

According to The DePauw, the last time the university cancelled classes was in 1884 when a student was nationally recognized for athletics. The student was welcomed back with a 21-gun salute.