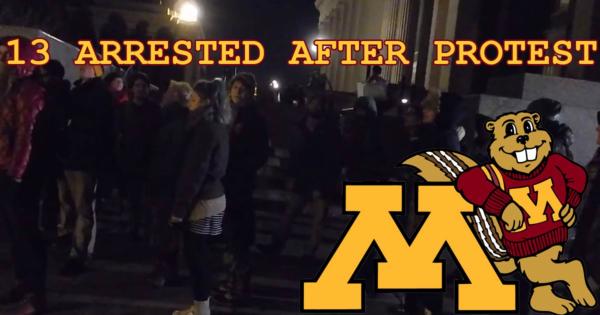 A seven hour sit-in at the University of Minnesota resulted in the arrest of 13 people as the group protested a perceived lack of diversity on campus.

A group called Whose Diversity marched from Coffman Student Union to President Eric Kaler’s office in Morrill Hall with a list of eight demands, resulting in the lockdown of the building. After more than seven hours of deliberation with Kaler, Provost Karen Hanson and Vice President for Equity and Diversity Katrice Albert, 13 students and non-students were arrested for refusing to leave the building.

The 13 were arrested shortly before 7:30 p.m. and were escorted out of the building where they were taken to the Hennepin County Jail. The university said arresting the students was a last resort.

“This U has shown that it is not as welcoming or diverse as it wants to say it is,” Natia Linoo told Campus Reform.

Linoo was at the protest to show support but is not a student at the university anymore.

“The University shares a deep commitment to increasing faculty, staff and student diversity and to creating a community that welcomes and embraces all experiences and perspectives. Addressing these concerns requires partnerships with all parties working together to achieve a common goal. However, discussions and goal setting must occur without disrupting University business and with respect for the law,” the U of M said in a statement after the students were arrested.

Armed with pita bread and hummus to tide them over, the group was prepared to stay in the president’s office until their demands were met or they were forced out by police, Linoo told Campus Reform. Students shouted updates from the windows of the president’s office to other student protesters who remained outside the building.

The eight demands included: increasing the number of faculty in the Department of Chicano and Latino Studies, removing racial descriptions in university crime alerts, hiring more faculty of color, creating a program to recruit students of color from working-class families in the Twin Cities, requiring all students to take a course from an ethnic studies department, having a gender neutral bathroom in every campus building, and removing questions about past criminal offenses on university applications for potential students.

The eight demands students are fighting for are part of a total 32 demands they have for the university that can be found on their website. Some of the other demands include a plan for increasing the number of students of color, having one meditation room on every university campus, and requiring all students to take a class that includes gender non-conforming issues.

The group has had these demands since last spring “in relation to the university’s commitment to diversity,” Amber Jones, a senior at the university, told Campus Reform. “They felt it was time to take over the president’s office so that’s what they are doing.”

“We know that this is important, not because we are selfish or anything, but because people are literally dying. My people are dying every 28 hours in this nation by police hands,” Tori Hong, U of M graduate and one of the organizers of the rally, told Campus Reform. “And the fact that our campus is sanctioning racialized crime alerts, dehumanizing and criminalizing black people on this campus who are just trying to learn and get a degree and breathe. If we don’t change things here it’s just going to keep going.”

Both Linoo and Jones said they have experienced oppression on the U of M’s campus, but were not willing to share specific experiences that have made them feel this way with Campus Reform.

“I don’t blame people. I blame systems of oppression that have existed long before we were ever born. Systems of white supremacy, of gender patriarchy, of heterosexism and, like, it happens all around us all over the globe, including the U of M campus,” Jones said.

Whose Diversity is not an official student group at the U of M and represents marginalized students at the university, according to its website. Its goal is to keep the university accountable to their demands and create a safe place for the underrepresented.

A fund has been set up to help raise money to bail out the students and non-students arrested, and leftover money will be used for legal fees. The students are set to appear in court at 8:30 a.m., on Feb. 24.