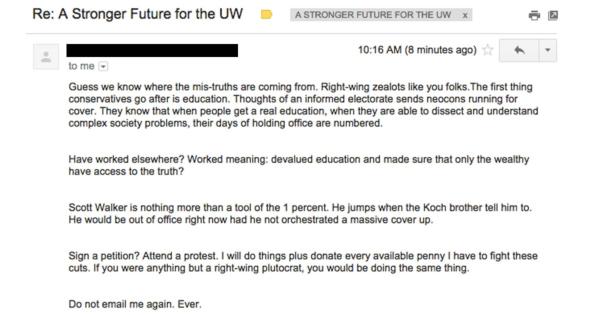 College Republicans at the University of Wisconsin-Madison are being barraged with emails calling them “cunts” and telling them to “fuck off” after sending a campus-wide email regarding Gov. Scott Walker’s (R) recent budget proposal.

Walker’s 2015-17 budget proposal, which includes more than $300 million in cuts to the University of Wisconsin system, incited several protests on Wisconsin campuses over the past few weeks. In the wake of the protests, CRs at the notoriously liberal UW-Madison paid a $100 fee to send out a school-wide email that they hoped would provide balance to the debate.

"“[Walker] puts this into motion because he wants to eliminate intelligence in wisconsin [sic] and its [sic] disgusting."

The email, obtained by Campus Reform, reassured students that “[t]he door for dialogue and engagement is wide open,” urging peers, “[b]efore you attend a protest or sign a petition, come to your own conclusion.”

“Proposals like these have worked elsewhere,” the email said. “In 2005, Virginia passed a similar bill to what Walker is proposing. It granted more autonomy to the state system as long as the system met certain educational goals and requirements laid out by the legislature. More autonomy coupled with more accountability.”

Soon after sending the email, the students received dozens of responses, including a variety of emails telling the CRs to “fuck off.” Others chose to refer to the CRs as “neanderthals,” right-wing zealots,” “right wing plutocrats,” “ignorant mouthpieces,” “hateful,” and “cunts.”

Walker also received a number of insults from disgruntled students who have referred to him as “pig,” “puppet,” and a “tool of the 1 percent” among other names.

“[Walker] puts this into motion because he wants to eliminate intelligence in wisconsin [sic] and its [sic] disgusting,” one student said in an email to the CRs, obtained by Campus Reform.

“The first things conservatives go after is education,” another student wrote. “Thoughts of an informed electorate sends [sic] neocons running for cover.”

One student simply replied, “[f]uck Republicans. They are ignorant and hateful people.”

“We have never done an all campus email before so we didn't know what to expect,” Charlie Hoffman, communications director for the UW-Madison CRs told Campus Reform. “We for sure were not expecting them to be so negative and nasty.”

While the CRs had to pay for their pro-Walker email, school administrators have been able to send emails encouraging students to protest and fight the budget cuts, according to Hoffman, who added that the emails from the administration and student body president were sent free of charge.

According to Alex Walker, the Wisc., governor’s son, protesters have targeted his elderly grandparents’ home.

They're protesting out front of our home. Who lives there you might ask? My grandma & grandpa. Unbelievable. pic.twitter.com/j7PG9zM6RS

Hoffman noted that the chapter has about 170 dues paying members but that their meetings have attracted crowds of up to 250 students.

In addition to appearing on a number of talk radio shows, the CRs have been using social media to raise awareness about the backlash.