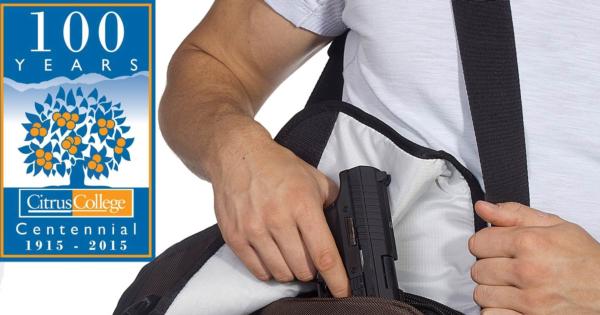 An active shooter drill simulation—during which a person armed with real guns would fire blanks on campus—was canceled at Citrus College after intense criticism from professors and veteran students.

The public community college, located in a Los Angeles suburb, participates in campus emergency drills multiple times each year. According to a school official, campus emergency situations can range from an active shooter on campus to a nearby fire or earthquake.

The Citrus College community will participate in an active shooter drill, still scheduled for March 19; however, the event will no longer include an active simulation component.

Arvid Spor, interim vice president of academic affairs, told Campus Reform that the local police department and a private consulting firm “recommended” including an active shooter during the drill who would fire blanks.

Sgt. Michael Henderson of the Glendora Police Department told Campus Reform that “usually that is not something [the police department] would encourage or recommend,” but Henderson also said that he didn’t want to “speak out of turn” as he said he was not in charge of that detail.

While the school’s administration had been considering the recommendation, Spor told Campus Reform that he met with the college’s president, Geraldine Perri, earlier this week and the pair ultimately decided to nix the shooter from next week’s drill.

“The reality is—it would take a lot of work and preparation,” Spor said in an interview with Campus Reform.

Citrus College faculty and staff were sent a memo on Wednesday, obtained exclusively by Campus Reform, that said next week’s lockdown will no longer “include the use of simunitions (blanks) as part of the drill.” 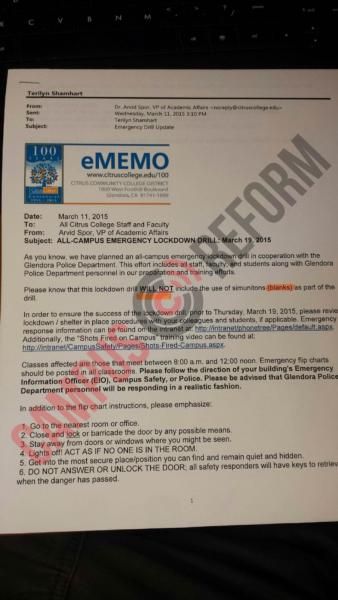 “I do not think they should have any blanks like that going [off] near [campus], because, who knows, maybe someone may actually have a gun and shoot back,” Bruce Stoner, a computer technology professor, told Campus Reform. “You know, if I had one, and I heard someone shooting at students, I wouldn’t think twice about taking him out.”

Spor said the community college may consider bringing the active shooter to campus in future drills, but for now, the college is not prepared. Citrus College would need to inform the local community of the active shooter and consider students and faculty who may be suffering from post-traumatic stress disorder (PTSD), he said.

“The local police department has done practice on campus that included blanks in a limited setting,” Spor said, adding that the college roped off the area where the police were working.

He said that the local police came to campus for a separate educational event after a shooting at nearby Santa Monica College in 2013.

Only a "handful" of Citrus faculty were made aware of the plan, Spor said, until one person leaked it on social media.

Campus Reform was first made aware of the plan to use an active gunman by Rachel King, a mathematics major at Citrus College. King told Campus Reform that while she thought the drill was only a rumor at first, several professors who were critical of the event decided to tell students in order to avoid any accidents during the drill.

Monica Christianson, the director of the Veterans Success Center, claimed that the simulation component was crucial for the staff to be prepared in cases of emergency.

“What the students and everybody doesn’t know, probably, we internally go to trainings, FBI trainings, all those, we hear about things that you don’t hear about,” Christianson told Campus Reform. “So we need to prepare this campus. You can’t have a lockdown if there are no classes.”

She also said that even though professors and students were informed of the drill via email, and she personally posted about the simulation on Facebook, many people didn’t take the time to fully read the email, which led to some of campus-wide panic and controversy surrounding the drill.

According to Christianson, the active shooter portion of the drill was cancelled because of the large number of complaints the school’s administration received from concerned faculty and staff.

Citrus College is a nationally recognized veteran-friendly institution, winning the Center of Excellence for Veteran Student Success in 2010 from the Department of Education.

When made aware of the drill, many veteran students told Campus Reform that they were outraged at the lack of transparency with the event as well as the idea of putting veterans back in harm’s way.

Current student government Vice President and Air Force veteran Phoenix McCoy told Campus Reform that a drill with an active shooter could put veterans in harm’s way as it’s “irresponsible to have an active shooter on campus” when so many veterans at Citrus might suffer from PTSD.

McCoy also added that she believed several veterans “would rise to the occasion” and “be a leader and get people to safety.”

According to Spor, Citrus College, which has an enrollment of more than 12,000 students, is home to “at least” 100 student veterans in Glendora, Calif.

Spor also said that while “it’s not like every veteran has PTSD,” it’s impossible for the college’s administration to know what faculty, staff, students, and community members on campus have experienced that could cause someone to react negatively to an active shooter simulation.

Vinny Sinapi-Riddle, a sophomore computer technology major at Citrus, told Campus Reform that the idea of bringing an active gunman to campus is “nothing short of reckless and shortsighted.”

On the same day as the drill, Citrus College will also host the College Fair where various private and public schools send representatives in search of prospective students.

“Even if students and professors were aware of the drill, it would have come as a surprise to councilors from other schools during College Fair, which is supposed to be the same day,” Sinapi-Riddle said.

Campus safety officials at Citrus are unarmed and will be on hand to monitor the drill next week to ensure that all faculty and staff participate fully and that the drill runs smoothly.