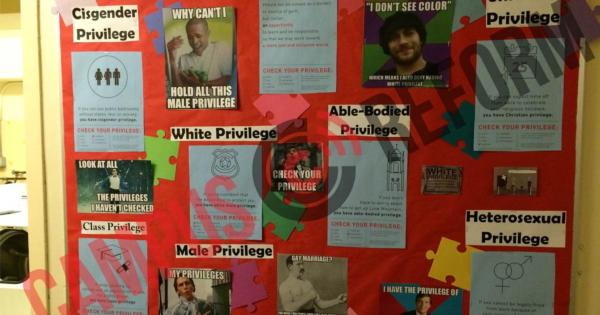 A bulletin board hung by a resident assistant in a primarily freshmen and sophomore dorm shames those who are have white, male, Christian, able-bodied, heterosexual, or cisgendered “privilege.”

“Why can’t I hold all this male privilege,” reads one meme on the bulletin board hanging at Appalachian State University.

"A residential hall is the last place to push an agenda."

“‘I don’t see color’ which also means I deny having white privilege,” reads another flier on the red board adorned with colorful puzzle pieces.

The fliers are products of the “Check Your Privilege” campaign started by three University of San Francisco professors, as previously reported by Campus Reform.

“If you can expect time off from work to celebrate your religious holidays, you have Christian privilege,” one flier reads. 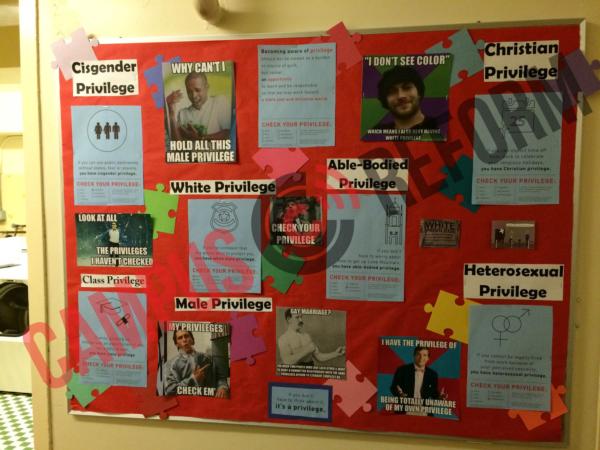 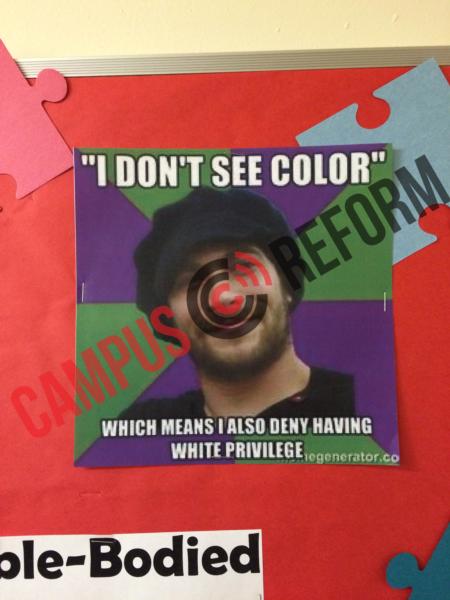 According to Laurel Littler, a junior commercial photography major at Appalachian State, the bulletin board was approved and put up by the hall’s RA.

“A residential hall is the last place to push an agenda,” Littler told Campus Reform. “When I come home, I want to feel accepted, not outcasted for something I can't help. I can't help that I'm Caucasian. Will they be happy if I change the color of my skin so I don't have my ‘white privilege’ anymore? I want to be comfortable in my own skin. You can't preach equality if you aren't willing to let a people group feel accepted as they are.”

Littler said that since college is supposed to be a “marketplace of ideas,” college students should not only have the freedom to state opinions but also the freedom to challenge the ideas of others.

“A person has to use common sense and sensitivity to a person’s background when addressing issues,” she said.

According to Mike Herbert, a sophomore communication major who lives on the hall, coming back to school after Spring Break to see the bulletin board only added to the already contentious relationship between students on the hall and the RA, who took over only a few months prior.

“It was like a slap in the face,” Herbert told Campus Reform in an exclusive phone interview Monday afternoon. “Although a lot of us have similar views as he does, we feel like it’s a giant middle finger to us.”

Herbert said one flier on the bulletin board told students who didn’t understand “what was wrong with [them]” to come to the RA’s dorm room so that he could “enlighten” them.

“At the end of the day, it is important to realize privilege, realize class difference, so that people can learn and engage with other people,” Herbert said. “In this particular instance, it’s very condescending. It’s arrogant. It’s very holier-than-thou.”

“He’s supposed to be our RA,” said Herbert, who told Campus Reform that he agreed with the bulletin board’s message. “It’s his job to make sure we don’t burn down the place and go to school. It’s not his job to flaunt his own personal and political views, even if we agree with him.”

Herbert said he would be fine with the bulletin board existing in a more public area on campus that was sponsored by a student group such as App State’s LGBT group.

“I’m sure there are people who disagree with the views he presents [with the bulletin board in the dorm] which is a big problem for the RA to alienate people this way,” he said.

According to App State’s website, RAs are “mentors” to between 30 and 60 students.

“The RA is responsible for facilitating a cooperative and considerate community environment,” the website states. “To achieve this goal, the RA is expected to initiate relationships with residents, encourage participation in hall and area programs, and inform residents of university and departmental policies. In addition, the RA assists with the personal and academic concerns of students, mediates interpersonal conflicts, and serves as an information resource for residents.”

Neither the residence director of the dorm—East Hall—nor the Senior Associate Director of Residence Life at App State responded to a request for comment from Campus Reform.

App State also did not respond to a request for comment from Campus Reform.