Pro-life display vandalized at Clarion U. 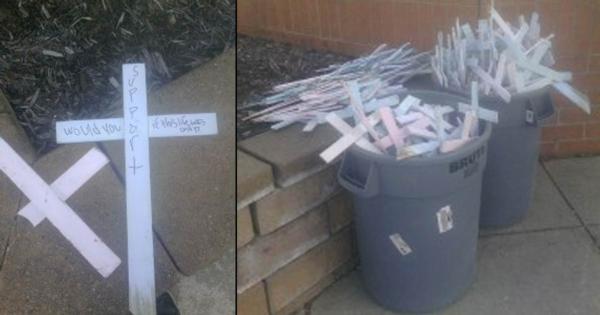 Students at Clarion University in Clarion, Penn. wasted no time vandalizing a pro-life display set up on campus Sunday evening.

Less than 12 hours after the public university’s Students for Life chapter set up its annual Cemetery of the Innocents—a display of dozens of white crosses commemorating millions of lives lost to abortion—students vandalized and mocked it.

"I find it quite ridiculous that this is the second time since 2011 that our crosses have been desecrated."

According to Todd Garrett, a senior at Clarion and vice president of the SFL chapter, the vandalism marks the second time in four years the pro-life student organization’s display has been damaged.

“This was a reprehensible act of discrimination against Students for Life,” said Garrett. “It was an attack on the freedom of speech. I find it quite ridiculous that this is the second time since 2011 that our crosses have been desecrated.”

In 2011, students at the Pennsylvania-based public university turned the 350 crosses upside down and splattered them with red paint. The paint was also used to draw fake infant’s footprints on the sidewalk in front of the display.

“Instead of dialogue, abortion supporters have once again taken to bullying to silence those with whom they disagree,” Kristin Hawkins, president of Students for Life of America, said in a statement sent to Campus Reform. “Perhaps, if the vandals had sought this dialogue with Clarion Students for Life they would have learned that pro-life students support the right of every human person to be person, no matter their gender identity or sexual orientation.”

Hours after they discovered the acts of vandalism, members of the university’s SFL chapter reconstructed the display on campus. University police are currently looking into the incident and informed SFL that they plan to examine video surveillance footage to determine who is responsible for the vandalism.

An employee of Clarion’s Office of Social Equity said the office was “not in the position of commenting” on the incident and refused to identify herself by name to Campus Reform.

“I ask that as a community of educators and students, we come together and reflect upon our commitment to our rights and responsibilities of expression.  I ask that we use dialogue and discussion to engage very differing viewpoints in ways that leave all of us better for the experience,” Whitney said.

This story has been updated to include a statement from the university.