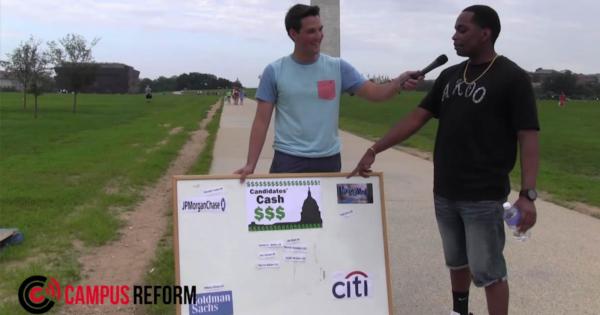 On Monday, Hillary Clinton gave a speech outlining her economic vision for the United States.

Clinton spoke on the need for a minimum wage increase, her intent to build upon Obamacare, and—perhaps most notably—spent a portion of her speech offering harsh criticism of Wall Street, promising to “protect” and build upon strict regulations put into place by President Obama.

Harsh platitudes bashing Wall Street are nothing new for Clinton, who said last month during her announcement speech that “prosperity can’t be just for CEO’s and hedge fund managers. Democracy can’t be just for billionaires and corporations.”

She added that, “Republicans trip over themselves promising lower taxes for wealthy and fewer rules for the biggest corporations without regard for how that will make income inequality even worse.”

So when Millennials are asked which presidential candidate has received the most money from four top financial firms, students predictably selected Republicans.

“Donald Trump getting some money from one of these boys,” one Millennial responded, “Trump for sure,” said another.

“I just kind of figured, big banks, ya know—always going with the Republicans.”

"I don’t vote for hypocrites” another student said. “Not voting for Hillary.”

So what do young people think of a candidate criticizing Wall Street, then soliciting them for millions of dollars in campaign funds? Watch the exclusive Campus Reform video here.