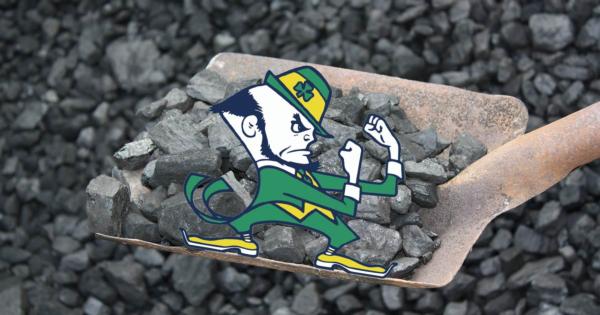 The University of Notre Dame (ND) recently announced an environmentalist initiative in honor of Pope Francis’s visit, and another one is reportedly in the works.

ND President Fr. John Jenkins announced in a press release Monday that the university will completely phase out the burning of coal at its on-campus power plant over the next five years, and plans to invest over $100 million in various renewable energy projects to replace the lost power generation.

"I think the idea that you could graduate from the University of Notre Dame and not know something about your changing planet is just unacceptable."

“In recognition of both Pope Francis’ encyclical and his visit this week to the United States, Notre Dame is recommitting to make the world a greener place, beginning in our own backyard,” Father Jenkins said. “Of greater importance, however, are the contributions our faculty and students are making across disciplines to find sustainability answers, especially for poor countries in most need of development and the most vulnerable to climate change.”

The transition is less sweeping than it initially appears, as ND has already cut the share of coal-fueled power generation from 85 percent to 15 percent, but the university projects that the effort will eventually reduce CO2 emissions by 47,500 tons.

Initially, ND says it will increase its reliance on natural gas to fuel the power plant as it reduces coal usage, but over the long term it plans to develop new energy sources including geothermal, solar, hydroelectric, and heat recovery.

ND executive vice president John Affleck-Graves told The Houston Chronicle that the university expects the transition to save money in the long term, claiming that the investments in renewable energy should be offset by reduced spending on coal fuel over a period of about 30 years.

“You get your payback over time because you're not paying for it every year,” he explained.

Despite an ongoing campus campaign urging the administration to shift endowment investment from fossil fuel companies to “more environmentally and socially responsible companies,” however, Argus reports that Notre Dame has no plans to follow the lead of several other Catholic universities that have recently divested their holdings in the coal industry.

While ND’s announcement was explicitly timed to coincide with the pope’s visit, it also came in close proximity to reports that ND might add a sustainability-themed course to its general education requirements.

ND’s student newspaper, The Observer, reported Friday that a faculty committee carrying out a decennial review of the university’s core curriculum is considering the addition of several new course requirements, including ecological literacy and U.S. diversity.

The 14-member committee, appointed at the beginning of the last school year by President Jenkins and Provost Thomas Burish, has so far devoted most of its time to collecting input and suggestions from students and faculty. It is now assessing the various ideas that have been put forth, and will issue a non-binding report sometime this fall outlining its recommendations.

The ecological literacy requirement was proposed in April by Debra Javeline, an associate professor of political science who also teaches a course on sustainability, and was endorsed by 109 faculty members.

“It turns out that there are more faculty members than you would believe whose work somehow touches on ecological issues, issues about climate change, sustainability,” Javeline told The Observer. “The curriculum review process allowed us a venue to discuss and promote ideas that we’ve already been talking about.”

Javeline went on to defend the idea as reflecting contemporary political priorities, calling sustainability “the defining issue of our time,” and adding, “I think the idea that you could graduate from the University of Notre Dame and not know something about your changing planet is just unacceptable.”

Similar motivations appear to underlie a separate proposal, advanced by associate professor of American Studies Jason Ruiz with backing from other faculty in the department, to create a U.S. diversity requirement.

The proposal stipulates that “at least two-thirds of the content [would deal] directly with race, ethnicity, class, sexuality, or gender in the United States,” which Ruiz told The Observer would show students that “part of [America’s] strength is in diversity.”

Both Javeline and Ruiz also claimed that the courses they proposed have experienced growing demand from students in recent years, though they failed to explain why the popularity of a given course should have any bearing on the decision to include it in the core curriculum.

Campus Reform reached out to both professors for comment on their respective proposals, but neither had responded by press time.