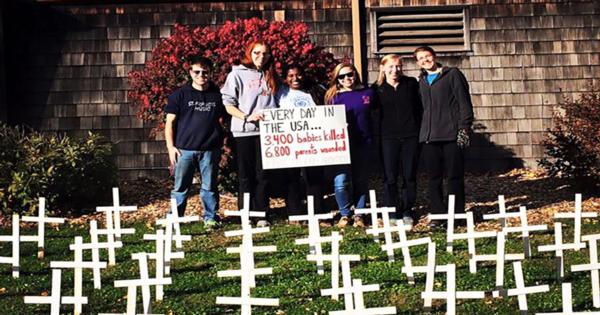 A pro-life display put up by a student group at the University of Wisconsin-River Falls was vandalized Sunday morning.

Members of the UWRF Lifeguards club told Campus Reform that they had erected the “Cemetery of Innocents” display—featuring wooden crosses symbolizing the number of daily abortions in the United States—last Thursday afternoon, but did not encounter any significant hostility for the first few days that it was up.

A picture posted on Facebook shows several members of the group standing behind the crosses while holding a sign saying, “Every day in the USA … 3,400 babies killed/6,800 parents wounded.”

Around 10:00 a.m. on Sunday morning, however, one of the group’s members found the site in disarray. Pictures of the vandalism, which were provided to Campus Reform, show the crosses broken and strewn across the lawn in front of the St. Thomas More Newman Center, a Catholic chapel and ministry located across the street from campus.

Lifeguards president Marie Regnier told Campus Reform that the group had secured permission from the Newman Center to put up the display, noting that the Deacon who manages the center even constructed the crosses for them.

Group member Laura Vogel added in an email to Campus Reform that the group is refusing to be cowed by the incident, and has already restored the display and replaced the broken crosses. Moreover, she said, “we talked to the Deacon who made the crosses for our display, and he said that he would be making even more crosses to add to our display, as well as to add to our backup crosses.”

“We kind of expected that it would get vandalized at some point or another because abortion is such a controversial topic, but also we were very non-confrontational,” Regnier told Campus Reform. “It just goes to show what lengths people will go to and how strong a debate there is about this.”

She ended on an optimistic note, though, saying, “The vandalism means that somebody had to see it, so hopefully it touched their hearts somehow.”

Spokespersons for UW-RF declined to comment because the Newman Center is not located on university property.