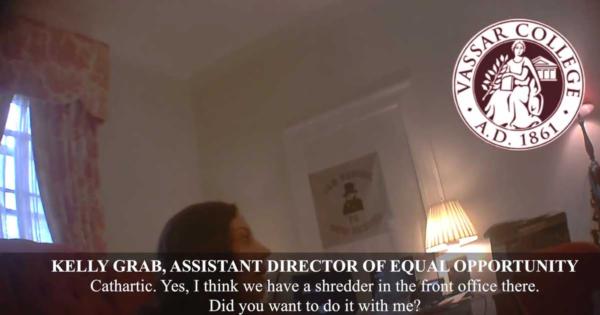 Administrators at Vassar College agreed to personally shred a pocket Constitution after an undercover reporter posing as a student complained that she felt “triggered” by its distribution on campus, while professors at Oberlin College confided that they shared the reporter's misgivings about the founding document.

The video was produced by Project Veritas, a non-profit established by conservative journalist James O’Keefe, and employs a similar style to the undercover ACORN videos that first brought him to prominence.

“Honestly, can we just like destroy... is there a shredder or something? I think it might be really therapeutic."

“Last week something kinda happened on campus that kind of really upset me and I ended up having a panic attack,” the reporter tells Vassar College Assistant Director of Equal Opportunity Kelly Grab. “It’s just I’ve been kind of hiding out in my room ever since kind of scared, so, finally somebody told me I should maybe come talk to you about it and see if there’s anything that can happen or anything … They were handing the Constitution out on campus.”

“Oh, CATO Institute,” Grab murmurs while looking the booklet over.

“They were handing it out and as soon as I saw it you know I started to not be able to breathe, hyperventilating,” the reporter elaborated. “My vision went blurry and I just—kind of just lost control.”

After establishing that the reaction was triggered merely by the offering of copies of the Constitution and not by anything the group had said, Grab offers her sympathies to the reporter.

“And so what I think you’re sharing with me is that your interaction in receiving this was harming, right?” Grab confirms. “And that’s what we certainly want to avoid; we don’t want to limit people in exchanging ideas or having opposing viewpoints, but when it’s disruptive or causing harm…”

“Yeah, which I think the Constitution does,” the reporter interjects. “I mean, it’s not just me, it’s—I mean I thought that Vassar wanted to create like a safe place here, you know a place that … where students could walk around and not be scared of seeing discriminating things on campus.”

Noting that “I’m sure there are also some people who, who maybe don’t understand the impact that this might have on folks,” Grab asks the reporter whether there is anything that can be done to create an “educational moment” regarding the issue.

“Yeah, I guess, maybe,” the reporter responds, suggesting that “maybe the Constitution should be removed from campus permanently.”

Grab stops short of endorsing that idea, but asks the reporter if there is anything she can do with the copy of the Constitution that was brought into the office.

“Cathartic … Yes, I think we have a shredder in the front office there,” Grab replies. “Did you want to do it with me?”

The video then show Grab and the reporter enter another office, where Grab proceeds to shred the entire Constitution, page by page.

“Thank you, that made me feel better,” the reporter says, to which Grab replies, “[g]ood.”

A narrator then asserts that when the reporter tried the same story at Oberlin College, several professors made similarly shocking statements.

When the complaint was brought to Wendy Kozol, Professor/Chair of Comparative American Studies at Oberlin, she agreed after a long pause that “[t]he Constitution in everyday life causes people pain,” adding that she rarely discusses the Constitution in class, and that when she does she tends to focus on specific amendments.

After some prompting from the reporter, she concedes that her hesitancy reflects her belief that the document is flawed, and suggests working with student groups to host a dialogue concerning “the ways in which the Constitution in everyday life causes people pain.”

“So, obviously my end goal is I want the Constitution to not have such a central part here at Oberlin—I would like people to see how discriminating it is and how racist it is,” the reporter tells Kozol. “Do you think that’s a reasonable goal that we could get to?”

“Absolutely,” Kozol says. “I think there are a lot of people who will immediately agree with you and join the conversation and think about ways to limit, confine, or talk back; maybe you just want to talk back to the Constitution.”

Carol Lasser, Professor of History and Director of Gender, Sexuality, and Feminist Studies at Oberlin, likewise concurred that “[t]he Constitution is an oppressive document” because it intentionally makes change a slow process.

“I think birthright citizenship is right,” she whispers. “And you know that if that was up for a vote today we would lose it under the craziness of Trump and his seven dwarves.”

She then observes that “[t]he Constitution is not a sacred document in that sense,” citing the Second Amendment as an example and asking, “[w]hat could be clearer than, I mean at least from my point of view, that the founders never envisioned giving people carte blanche to own assault rifles?”

Colleen Cohen, Faculty Director of Affirmative Action and a Professor of Anthropology at Vassar, is even more indulgent of the reporter’s complaint, saying, “[i]t’s horrible that this is something that has caused you such pain,” and despairing that “unless the people are from off campus,” there is nothing the college can do to prevent the Constitution from being distributed.

“Can I destroy this?” she asks the reporter, referring to the Constitution. “Or did you want to hold on to it?”

“Well, could you destroy it?” the reporter says. “Maybe it will feel, you know, therapeutic for me.”

Subsequently, Cohen hangs up her office phone and informs the reporter that she will not have access to the shredder until her secretary returns, but promises to destroy the document at that point.

O’Keefe also makes sporadic appearances in the video as he hands out pocket Constitutions while dressed in a comical Constitution costume.

“When this idea came up in our newsroom about campus administrators shredding the Constitution because it’s a trigger against students, we didn’t think people would actually fall for it,” he says at one point. “We underestimated just how stupid and politically correct these people are.”

“We were amazed and disappointed,” the narrator intones at the end of the film. “Political correctness and cultural sensitivity run amok.”

Jeffrey Kosmacher, Director of Media Relations and Public Affairs at Vassar College, told Campus Reform that nobody from Vassar would have any comment on this story.

Campus Reform likewise reached out to Professors Kozol, Lasser, and Cohen, but none had responded by press time.