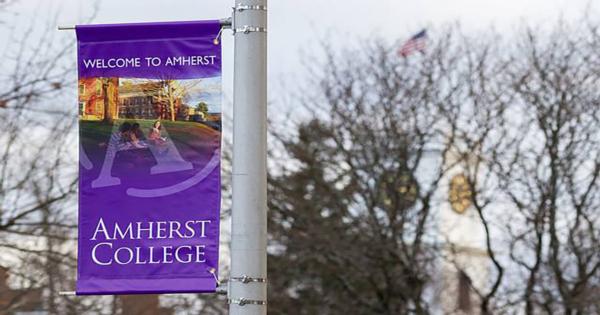 Student protesters at Amherst College are applauding President Biddy Martin for her response to their demands for various diversity initiatives, even though it does not include concrete commitments.

The list of demands—which grew out of a sit-in to show solidarity with the Mizzou protesters and were presented to Martin last Thursday—called for both President Martin and Board of Trustees Chairman Cullen Murphy to formally apologize for institutional racism, as well as for posters that had recently been displayed on campus stating “All Lives Matter” and “Free Speech.”

“We acknowledge she can't apologize for things out of her control.”

The protesters also insisted that students should be excused from classes and other academic obligations to attend the sit-in, and that the administration scrub all references to the school’s unofficial mascot, Lord Jeff.

In her official response to the ultimatum Sunday night, President Martin expressed sympathy for the grievances that had been presented to her, and outlined a number of steps that she would pursue taking to improve diversity on campus, but made clear that some of the students’ demands were beyond her authority to comply with.

“When I met yesterday in my office with a small group of student organizers, I explained that I did not intend to respond to the demands item by item, or to meet each demand as specified, but instead to write a statement that would be responsive to the spirit of what they are trying to achieve—systemic changes that we know we need to make,” Martin writes. “I also talked about why apologies of the sort that were demanded would be misleading, if not downright dishonest, suggesting, as they implicitly would, that I or the College could make guarantees about things that are much larger than a single institution or group of people.”

She goes on to praise the demonstrators for “exercising a fundamental American right to freedom of speech and protest,” but then adds a caveat, suggesting that freedom of expression may sometimes need to be curtailed in the interest of inclusivity.

“The commitments to freedom of inquiry and expression and to inclusivity are not mutually exclusive, in principle, but they can and do come into conflict with one another,” she notes. “Honoring both is the challenge we have to meet together, as a community. It is a challenge that all of higher education needs to meet.”

As an example, she points out that “those who have immediately accused students in Frost of threatening freedom of speech or of making speech ‘the victim’ are making hasty judgments,” because “while those accusations are also legitimate forms of free expression, their timing can seem, ironically, to be aimed at inhibiting the speech of those who have struggled and now succeeded in making their stories known on campus.”

Martin concludes by listing eight initiatives that she will pursue in the interest of increasing diversity, though most were fairly vague, such as “build a more diverse staff and faculty” and “support our faculty as they develop innovative ways of teaching our students.”

Having already rejected the demand for a public apology earlier in the statement, Martin does allude to the “Lord Jeff” request, but says only that she will “consider what messages our symbols send” without making any firm commitments.

Nonetheless, the protest movement’s organizers told MassLive Monday that they accept Martin’s reasoning, indicating that they will not be following through on their threat to escalate tensions through unspecified acts of “civil disobedience.”

“We do have faith in Biddy," said Thomas Keating, a spokesman for Amherst Uprising. "As she said in the letter, she can't go item by item and speak our demands into existence.”

“We acknowledge she can't apologize for things out of her control,” added Amherst Uprising spokeswoman Eva Cordero.