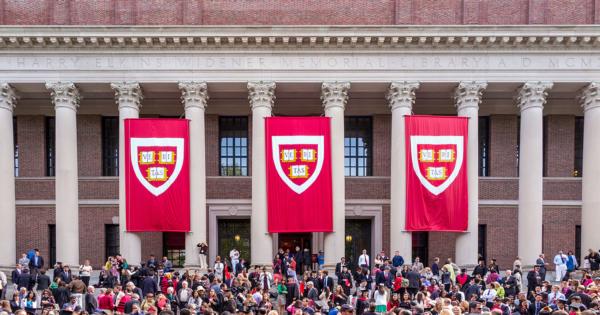 Harvard Dean of Student Life Stephen Lassoed and Dean of Freshmen Thomas Dingman have released an apology for the “Holiday Placemat for Social Justice” distributed in Harvard dining halls earlier this week.

Campus Reform originally reported the story after the Office for Equity, Diversity, and Inclusion at Harvard College confirmed the placemats were distributed in undergraduate dining halls. According to a campus representative, the placemats were created to help students facilitate what they deem to be difficult conversations when they return home to their families.

"Our goal was to provide a framework for you to engage in conversations with peers and family members as you return home for the winter break."

The placemat encouraged students to defend the motives of black student activists at other universities by saying: “When I hear students expressing their experiences of racism on campus I don’t hear complaining. Instead I hear young people uplifting a situation that I may not experience.”

The placemat also provided students with talking points for discussing issues such as “Black Murders in the Street” and “Islamophobia/Refugees.”

“We write to acknowledge that the placemat distributed in some of your dining halls this week failed to account for the many viewpoints that exist on our campus on some of the most complex issues we confront as a community and society today,” they said in a letter to students. "Our goal was to provide a framework for you to engage in conversations with peers and family members as you return home for the winter break, however, it was not effectively presented and it ultimately caused confusion in our community.” 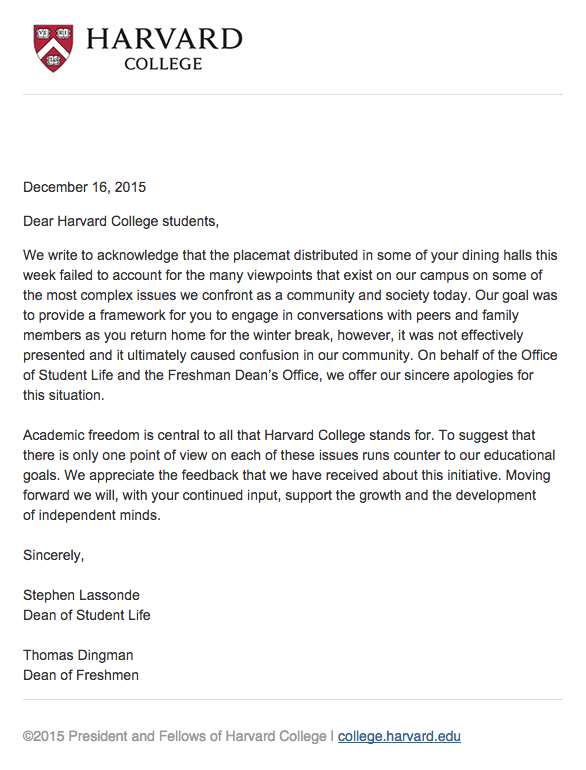 After the original placemats were distributed, Harvard GOP created alternative placemats in response.

“The placemats were made by members of the Harvard Republican Club to parody what we saw as a politically motivated action by the administration,” Aaron Henricks, a member of Harvard GOP, told Campus Reform. “ We thought it would be a way to gain attention to the problem we saw with the placemats. The Harvard administration has thankfully listened to our concerns and sent out an apology email to the college last night.”

Henricks expressed frustration with the Office for Equity, Diversity, and Inclusion, saying he felt excluded for holding different opinions on important issues. 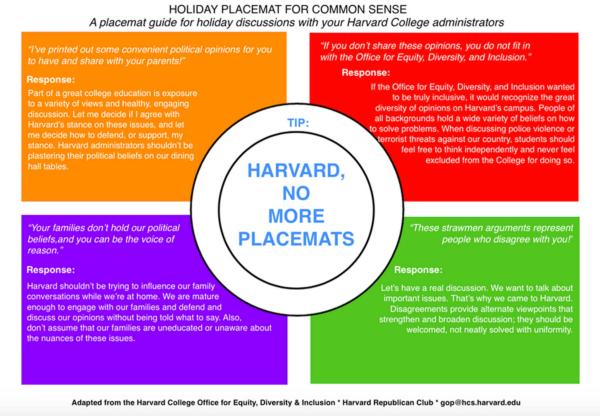 “Harvard shouldn’t be trying to influence our family conversations while we’re at home,” the placemat stated. “We are mature enough to engage with our families and defend and discuss our opinions without being told what to say.”