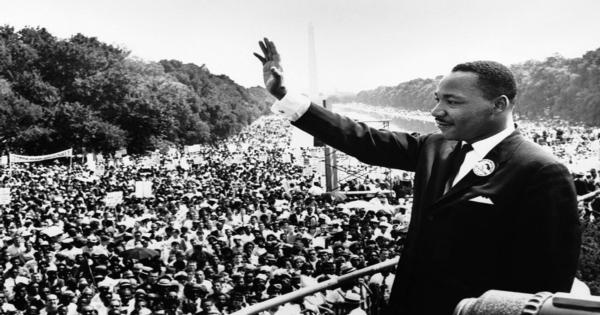 On Martin Luther King, Jr. Day, Ohio University President Roderick McDavis opined that MLK would have support the Black Lives Matter movement, were he alive today, only to be directly refuted later in the day by the civil rights hero’s own son.

“The intent of the Black Lives Matter Movement is to raise awareness to the fact that some people still believe that black lives do not matter,” McDavis said during a celebratory brunch Monday, according to The Compass. “If King were alive today, he would not be afraid to applaud the movement.”

"In no way do I, nor would my father, condone any ‘ends justify the means’ behavior.”

In fact, McDavis speculated, “perhaps he would remind us that having a black president does not mean we are all on equal footing when situations like Ferguson still occur.”

McDavis was followed by Yohuru Williams, dean of the College of Arts and Sciences and professor of history at Fairfield University, as well something of a self-appointed medium for Dr. King.

“We've taken a man and incarcerated his message and boiled it down to a couple of phrases from some key speeches, which don't encapsulate the life of a man who was a man of action and not a man of words,” Williams complained, saying that King’s ideas are too often reduced to rhetoric, when in fact he was a man of action.

“Those that are dying in large numbers are people of color in this country,” Williams continued. “So if all lives matter, we should demonstrate that by flocking to those communities where those lives are in the greatest danger and in jeopardy, and in this country those are communities of color.”

The BLM movement is not the only cause that Williams has endorsed MLK’s behalf, though, the professor having just the week before pronounced on Twitter that Dr. King “would have stood with striking teachers.”

The tweet includes a link to an op-ed Williams wrote for LA Progressive elaborating on his views, in which he argues that the grievances raised by teachers’ unions regarding controversial police killings, unfair labor contracts, and funding cuts are reminiscent of King’s campaign to eliminate poverty, racism, and militarism.

Around the same time that McDavis and Williams were making their assertions, however, Martin Luther King III was presenting a contrasting narrative in an interview with The Washington Times, saying his father would have been appalled at the rioting and acts of violence committed against police in “retaliation” for incidents such as the Michael Brown shooting in Ferguson.

“My father’s approach to the most brutal and unambiguous social injustices during the civil rights struggle was rooted in nonviolence as a morally and tactically correct response,” he reminded The Times. “In no way do I, nor would my father, condone any ‘ends justify the means’ behavior.”

King was referring to a comment from an anonymous University of Virginia student who participated in a vicious mob reprisal against the Phi Kappa Psi fraternity following a now-discredited Rolling Stone article accusing house members of orchestrating a gang rape.

The student justified the attack by saying he was inspired by the actions of black leaders in Ferguson, which had convinced him that “the ends justified the means,” but King, who was among those black leaders in Ferguson, lamented the student’s remarks, saying that responding to violence with more violence is “socially destructive” and “self-defeating.”

King hesitated to place the blame for activist excesses solely on the shoulders of students, though, asserting that the tense state of political discourse today also plays a role.

“It is not inconceivable that impressionable and often idealistic young college students—disillusioned by the media frenzy on both sides of the spectrum—would internalize their own frustration with society’s failures and lash out in an indiscriminate way,” King sympathized, though he also reiterated that they should address their frustrations through dialogue.

“The only way you change is you have to at least be communicating,” he noted.