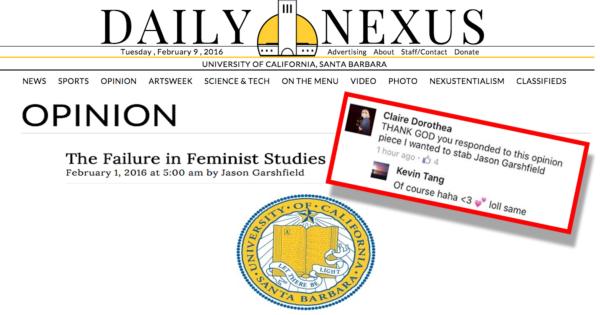 A student at the University of California Santa Barbara (UCSB) who published an article in his school’s paper criticizing the Department of Feminist Studies has received hostile criticism from his peers, including an online death threat.

Jason Garshfield, an opinion writer for the Daily Nexus, argued that any sort of feminism department must necessarily be biased because it is explicitly attached to a political movement. As a result, Garshfield concluded that feminism departments are unworthy of a place in academic institutions, especially UCSB, which bans any field of study that advances partisan interests.

"...I wanted to stab Jason Garshfield."

The University of California Regents Policy 3201, Garshfield noted, assigns regents with the responsibility “to see that the University remain aloof from politics and never function as an instrument for the advance of partisan interest. Misuse of the classroom by, for example, allowing it to be used for political indoctrination … constitutes misuse of the University as an institution.”

“How can an academic department which is explicitly named after a political movement possibly claim to be ‘aloof from politics?’” Garshfield asked. “Imagine how you would feel if there was a Department of Objectivist Studies at UCSB. The department was dedicated to promoting Ayn Rand’s philosophy of Objectivism. All of the professors were Objectivists, and students in the department were taught heavy doses of Objectivism without being exposed to a single dissenting opinion. Would you consider such a department to be ‘an instrument for the advance of partisan interest?’ You probably would.”

Garshfield then recalled a course he took in the Department of Feminist Studies early on in his academic career. The course, he said, promoted feminist premises like the “recognition of male privilege,” “commitment to social change,” and “social constructionism” (the belief that gender is a complete social fiction rather than a biological reality) without leaving room for question or debate.

After publication, Garshfield’s peers took to social media to attack his unpopular opinions. One person said she “wanted to stab Jason Garshfield” for expressing his views.

Claire Dorothea, who initially said she wanted to stab Garshfield, changed the word “stab” to “slap” after her comment received some attention.

Kevin Tang, also a student at UCSB published a response in the Nexus in which he dismissed Garshfield’s argument because he formed his opinion “after only taking one class in the entire department.” Tang posted his response to Facebook and garnered the support of many of his peers.

“Ikr like he needs to stop lol,” Tang replied. 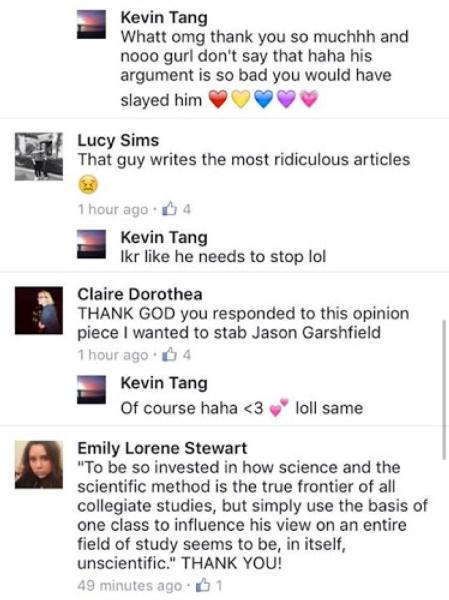 “Anything that Jason Garshfield writes is a [sic] narrow minded, ignorant, and misogynistic. Thank you for providing a voice of reason from our student body,” another chimed in.

One student called Garshfield’s article “fragile and downright fucking violent” just moments after Tang agreed that stabbing Garshfield would be an appropriate response. 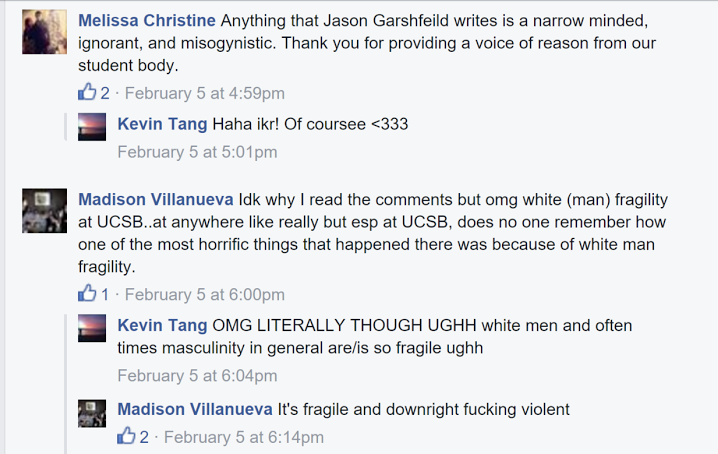 Another commenter criticized Tang for not approaching the topic objectively but Tang replied by saying Garshfield “doesn’t deserve” an objective response.

“If I had been writing an article for anything outside of this situation I would have been more objective but he doesn’t deserve it,” Tang wrote. 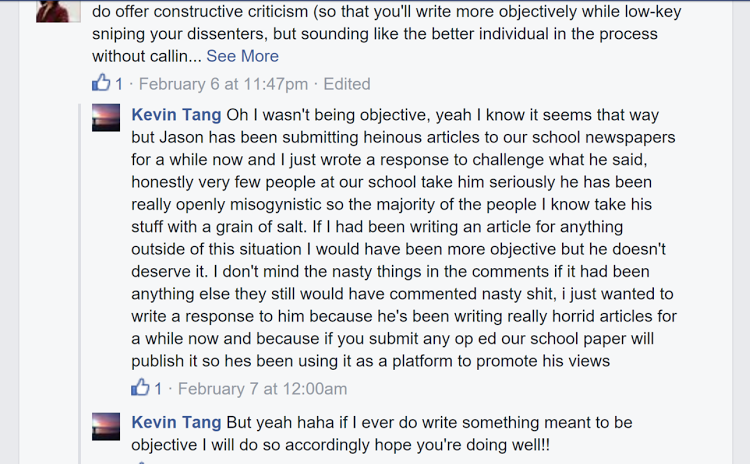 Garshfield has since challenged Tang to openly debate the issue in a public space on campus but has received no response.

“To me, this seems like a perfect example of the way in which conservative opinions are treated on the modern campus,” Garshfield told Campus Reform. “Our school is so quick to respond whenever left-wing students feel unsafe, but I doubt it will respond to this.”

Garshfield also pointed out the irony of Tang’s comment, saying it proved the point he initially set out to make.

“It's ironic because, in my original piece, I said that the Feminist Studies department enjoys an exalted place in our university and anyone who questions its necessity is immediately silenced. Responses like Kevin's prove my point better than I ever could,” he said. “By reacting so violently to a dissenting opinion, people like Kevin are showing their complete unwillingness to engage in dialogue with people they disagree with. They're demonstrating my point that departments on campus like Feminist Studies brainwash students with ideology rather than teaching them to think critically.”