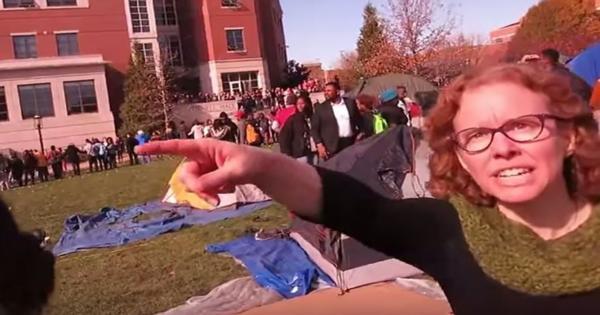 Melissa Click, who was suspended for her involvement in a student protest at the University of Missouri (Mizzou), spoke to the public for the first time on Wednesday.

“I feel embarrassed by my actions,” she told ABC 17’s Marissa Hollowed. “I never was calling for violence. It was just something that came out. I hope the people who watch this interview will be able to identify with saying something in a hectic and flustering moment that they didn’t mean.”

“I hope I’m put back in my classroom soon. My students want me back. I’m ready to be back in my job."

In November, Click was caught on video threatening a student reporter who requested an interview with her during an on-campus protest at Mizzou. Click immediately turned down the reporter’s request for comment and told him he needed to leave the protest. The reporter stood his ground causing Click to call out for “muscle” to forcibly remove the reporter from the protest. The video shows Click swinging at the reporter’s camera, leading some, including many state lawmakers, to believe she “assaulted a student.”

The day after the protest, Click resigned her courtesy appointment in the journalism school but remained an assistant professor of communication until she was suspended after Columbia city prosecutors filed a simple assault charge against her.

On Wednesday, after Click’s assault charge was dropped, she discussed her involvement with “Concerned Student 1950,” an activism group responsible for the Mizzou protests. Hollowed pressed Click on her role in the school’s communication department, a role that would imply Click understands the First Amendment rights of reporters.

“Well, I think context is really important,” she responded. “I didn’t see any police present on campus that day. Then to think back that MU students, staff, and faculty were the only ones present on the quad to keep the crowd calm, I think that raises a lot of questions about who was in charge of the university that day.”

Click admitted that she regrets her actions but defended herself by saying she was only trying to help a group of students in need.

“I saw them as a student group that was asking the university, the administration for help. And so I guess what I aligned myself with was helping students who were in need of help,” she explained after she was asked if she aligned herself with the motives of “Concerned Student 1950.”

Click claimed that the first interaction she had with “Concerned Student 1950” was during a protest at the school’s homecoming parade. Click joined in the protest but said she had no preconceived intention to do so.

“I stepped forward not knowing these students at all to stand with them to know that they wouldn’t be alone,” she said. Click continued to deny ever speaking with student protesters before the demonstration, saying she never “had any discussion or consultations with them” and “wasn’t that engaged with them to know intimately what they were doing.”

“I wasn’t surprised that I was charged given the politically charged nature of the video. I think that the prosecutor was under a lot of pressure to have people feel that he held me accountable but I think ultimately because he deferred and dismissed the charge, he believed that I shouldn’t be found guilty of misdemeanor assault. I believe it’s important to realize that many instances that could have been considered assault happened that day in Carnahan quad,” Click said.

Click’s future at the university is unclear. She is currently suspended from her position in the school’s communication department until the Board of Curators completes a review of her actions. Click, however, is determined to keep her job.

“Have you ever considered that stepping down would be a good option for the university as a whole?” Hollowed asked.

“I do believe that the mistakes I made that day should be put in the greater context of my 12 years at the University of Missouri,” Click replied. “I hope I’m put back in my classroom soon. My students want me back. I’m ready to be back in my job. I don’t believe I’m a danger to anyone. I have a lot to give to UM so I’m going to stay and fight for my job.”