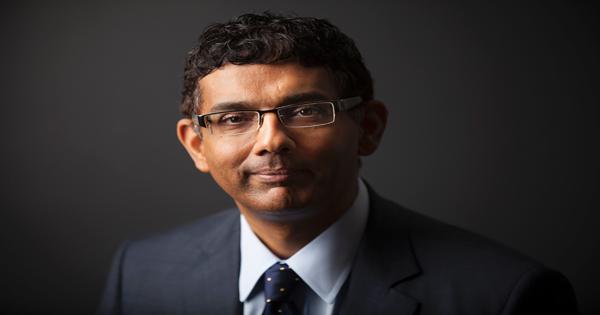 Gonzaga University has overturned its decision to close an upcoming lecture by Dinesh D'Souza to the public, conceding that the restriction was based on concerns about his words and views.

"The primary issue leading to the decision to not open the event to the public was a concern over the potential hurtfulness of Mr. D’Souza’s words/views, and that this might serve to create a hostile learning environment," University President Thayne McCulloh told the school community Friday in a statement that was also shared with Campus Reform.

"The primary issue leading to the decision to not open the event to the public was a concern over the potential hurtfulness of Mr. D’Souza’s words/views..."

Conservative students expressed outrage last week upon being informed that only students, faculty, and staff of the university would be allowed to attend the February 24 lecture, claiming they were told that "D'Souza's beliefs are contradictory to Gonzaga's 'social justice' mission," and specifically that "he is 'homophobic' and 'anti-immigration’."

Gonzaga initially countered that "the parameters of this event are in line with Gonzaga’s longstanding and common practice of balancing a broad spectrum of viewpoints while providing a supportive learning environment," but has now revised that determination in response to an official appeal from the school's College Republicans chapter.

"A clear intention of the policy is to make the outright prohibition of a speaker’s appearance on campus a decision of last resort," McCulloh notes after elaborating on the original rationale for restricting attendance at the lecture.

“A fundamental principle that sits at the heart of Gonzaga’s educational mission is the commitment to freedom of expression," he continues. "While this commitment is, for us, understood to operate in the context of and with respect for our Catholic, Jesuit, and humanistic mission, it is a critical component of the academic project—a project which seeks to educate our students to be critical, enlightened, and well-informed individuals.”

While he acknowledges that administrators had probably exaggerated "the potential hurtfulness of Mr. D'Souza's words/views," McCulloh also points out that, "as a practical matter, the amount of publicity generated around Mr. D’Souza’s planned upcoming appearance raises legitimate questions about how to meet audience demand while meeting our obligations to our students and community."

Moreover, "given that student fees and University resources form a primary source of support for this event," McCulloh says he settled upon a compromise solution that allows members of the public to attend the speech, but gives priority to students, faculty, and staff in ticket allocation.

There will be two ticket distribution periods—each with defined, well-publicized beginning and ending dates and times—first for the Gonzaga community and then for the public, with any unclaimed tickets to be made available to students, faculty, and staff on the day of the event. Additionally, the university is exploring the feasibility of videotaping and/or streaming the event online for those who are unable to attend in person.

UPDATE: Gonzaga spokesman Peter Tormey told Campus Reform that free tickets for the lecture will be available to the public from noon on Saturday, Feb. 20 until 8:00 p.m. on Tuesday, Feb. 23 (or until tickets run out). Only one ticket will be allowed per person, and they will be given out exclusively at the Welcome Desk on the first floor of the John J. Hemmingson Center on a first-come, first-served basis.