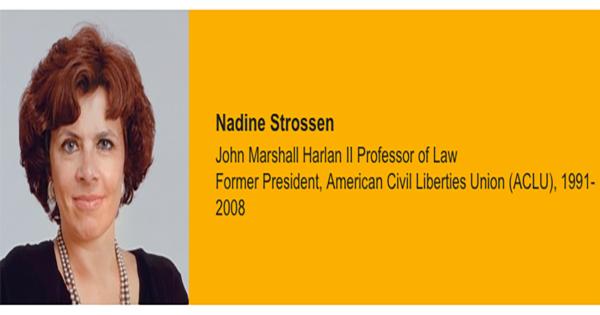 A former president of the American Civil Liberties Union claims that declining support for free speech on college campuses is the fault of liberal faculties that promote censorship.

Nadine Strossen, a New York School of Law professor who served as president of the ACLU for 17 years, strongly endorsed Purdue University’s commitment to free speech Monday in an interview with The Lafayette Journal & Courier, pointing out that support for the First Amendment has become “controversial” at most other schools.

“Sadly, support for robust free speech is declining among liberals..."

“Sadly, support for robust free speech is declining among liberals as it’s ascending among conservatives,” she noted, adding that “faculties typically are dominated by liberals.”

Strossen shared her insights into the state of free speech on college campuses while at Purdue preparing for a Tuesday night lecture on “Freedom for the Thought that We Hate,” during which she will address the importance of protecting all forms of expression, including those that can be considered offensive.

“I’m going to be talking about the concept of offensive speech, in general, because so many students and others seem to assume that you have a right not to be offended and a right to be shielded from any unwelcome speech,” she told the Journal & Courier. “We see too many campuses catering to students … and shielding them from it. I want to dispel the assumption that that is a good strategy.”

Citing surveys that show “very tepid support and, in some cases opposition, to cardinal free speech principles,” Strossen asserted that the trend “really appalls me … because censorship is the most damaging thing to anybody who lacks political power or espousing a minority position.”

What sets Purdue apart from most campuses, she said, is the “ Commitment to Freedom of Expression” that was adopted last year, which draws largely from the “Chicago Statement” pioneered by the University of Chicago.

“I’m completely supportive of the Chicago principles and applaud Purdue,” Strossen stated, explaining that while “they are not doing anything other than giving concrete details of what their constitutional obligations are under the First Amendment in the context of a public university … the climate on most campuses is such that—somewhat not surprising, though it’s shocking—it’s controversial.”

During her lecture Tuesday night, Strossen noted that she expects to encounter questions concerning a recent challenge to Purdue’s free speech commitment that arose after a pro-life student group posted flyers with statistics on abortion in the African-American community.

The posters generated a backlash against the pro-life students, most notably in the form of comments on social media from dance accompanist Jamie Newman. After referring to the student group as “vile” and “racist” on its Facebook page, Newman proceeded to make statements on a pro-life website in which he discussed raping the female relatives of another commenter.

Purdue declined to take disciplinary action against Newman, saying that while his statements were “reprehensible,” they were also protected by the First Amendment. Nonetheless, the school demanded a full apology from Newman, who not only refused to provide one, but tendered his resignation, as well.

Strossen told the Journal & Courier that she will be “ready” to address the issue during her presentation, which is scheduled to begin at 6:00 p.m. following opening remarks by university President Mitch Daniels.