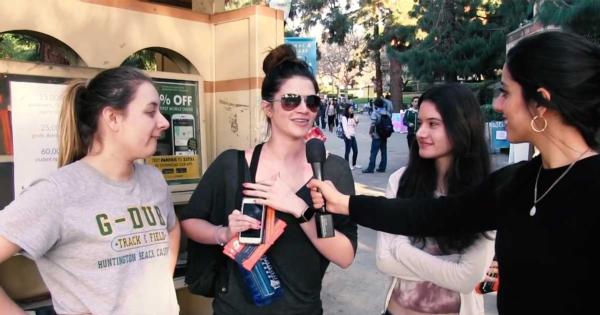 The American Dream has traditionally been seen as a promise that hard work will lead to success, but many college students today seem to think that government can replace the need for individual effort.

Campus Reform recently visited California to ask some UCLA students about the American Dream, and while the definitions they offered were fairly typical, some of their prescriptions for achieving the Dream were borderline fantastical, as this video shows.

We began by asking them, simply, “What is your definition of the American Dream?”

While it is hardly a foreign concept to most people in this country, several students had difficulty coming up with an answer at first, though all were eventually able to dredge up a brief description, even if some were seemingly retrieved from a memory vault that had been locked up tight since grammar school.

“I mean, it’s being successful; doing well; working hard,” one student ventured. Another student was less equivocal, saying, “It’s about getting money, you know?”

Campus Reform next asked the students whether there is any presidential candidate that they feel would best help them to achieve the American Dream, and given the tenor of their previous responses, even we were surprised at just how often the name Bernie Sanders was repeated.

“I’m for Bernie Sanders,” one woman began to answer, but then suddenly reconsidered, deciding that, in fact, “I love Bernie Sanders.”

Naturally, we asked the students what they find so appealing in Sanders’ candidacy, and the most common response, by far, involved his proposal to make higher education tuition-free.

“His educational plans … full funding for college education … I think college being free would give a lot of people opportunities,” said one student.

Another student, clearly struggling to recall her reasoning, stammered out, “uhhh … the tuition thing,” her face lighting up with recognition as the answer dawned upon her.

Others didn’t even bother with specifics, instead citing a vague sense that Sanders somehow represents an antidote to the current problems facing society.

“At this point, we need somebody who can really push forward radically,” one student asserted. “I feel like he can relate, a little bit,” added another, presumably referring to Sanders’ ability to relate to college students. Still another said, with a hint of gleeful rumination, that he supports Sanders because “he wants to kind of destruct capitalism.”

One female student, when pressed to explain her enthusiastic endorsement of Sanders, haltingly conceded, “I, I couldn’t … I don’t know … I couldn’t name something.”

Not everyone was quite so enthusiastic, though. One group of students gave him a particularly lukewarm endorsement, saying, “I mean I guess Bernie Sanders … If we had to pick, we’d say Bernie Sanders.”

Another female student that spoke to Campus Reform actually even rejected Sanders for being too moderate, saying she supports “neither” party’s candidates, opining instead that “I think the revolutionary leader Bob Avakian, who is the Chairman of the Revolutionary Communist Party is the biggest hope for humanity.”