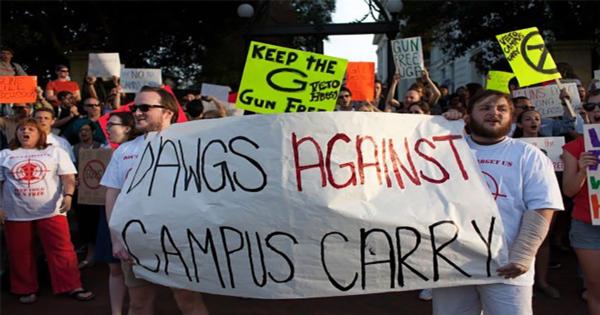 Faculty, staff, and students from the University of Georgia (UGA) fear House Bill 859, known as the Campus Carry bill, will soon be signed into law and could descend college campuses into a “Wild West” type scenario.

Over 150 students and faculty marched across campus Wednesday evening to protest the proposal, which passed the Senate on March 11. If Governor Nathan Deal signs the bill into law then anyone over the age of 21 with a weapons license will be able to legally carry a concealed gun on public colleges and universities with the exception of dormitories, fraternity and sorority houses, and at athletic events.

"Often our elected officials will ignore us as students because they think we’re uninformed and apathetic. But today they can no longer ignore us, because we’re here to show them that we don’t want guns in our classrooms,” Emma Krass, student and protest organizer, told Red and Black.

Along with the protest, students began an online petition, that has over 7,600 signatures, in opposition to the bill which they plan to send to Deal.

"I’ve talked to a lot of students, and most students don’t support this. Everyone’s fine with the way things are,” Johnelle Simpson, president of the Student Government Association, said.

Red and Black conducted a recent anonymous survey and found that 62 percent of over 400 respondents do not support campus carry.

[RELATED: Georgia profs. worry they may be shot by students with concealed weapons]

“I think having more guns in a school shooter situation would make the police’s job extremely difficult and might prolong the event and cause more death,” another respondent said, “As of now, if the police see someone with a gun on campus, they know it’s a problem. With campus carry, they can’t know until someone is shot already.”

Not all respondents were against the proposed bill. Some argued that citizens with concealed carry permits are the most law-abiding. Another said that, “People who want to shoot up a campus will still bring their gun, regardless of it being illegal.”

Because of the pushback, the office of Governor Deal released a statement Monday saying he will veto the proposal if lawmakers don’t make substantial changes to the legislation.

“As a lifetime defender and staunch supporter of Second Amendment rights, Gov. Deal has signed every pro-gun bill to reach his desk. However, he believes legitimate points have been made in regards to certain aspects of the ‘campus carry’ bill,” the statement says.

One of the changes may include allowing governing boards of universities to have discretion in setting reasonable rules regarding disciplinary hearings and faculty and administrative offices.

Mahroh Jahangiri, deputy director of Know Your Title IX, is opposed to lifting the gun ban and said that this will endanger those in “situations of intimate partner violence.”

“Some proponents of these dangerous bills have suggested that allowing students to carry guns would protect them from becoming victims of sexual assault. This could not be further from the truth,” Jahangiri toldRed and Black.

"Regardless of what your opinions are on second amendment rights, whether you think that citizens should have the right to own their own private gun, that should not extend to an open space like a campus," Zhu argued while also calling the bill “absolutely ridiculous” and “out of touch.”

Even student Brian Springsted, who has owned two guns since he was an adolescent, says he’s uneasy about students having weapons.

"Mistakes can be made, arguments can get heated and accidents can happen, whether there’s a disagreement or not. I’d rather limit the accidents to not being on this campus,” Springsted said."As a faculty member, I do not want to have some untrained individuals packing heat in an environment that is supposed to foster creativity, debate and free thought," Ivan Ingermann, associate professor at UGA, said.

"As a faculty member, I do not want to have some untrained individuals packing heat in an environment that is supposed to foster creativity, debate and free thought," Ivan Ingermann, associate professor at UGA, said.

Mehrsa Baradaran, associate professor of law, agrees with Ingermann saying she's here to teach, to learn, study and meet with students, not to fear constant attack.

"This is not the Wild West," Baradaran said.