Marquette prof refuses to apologize for blog post, challenges university to fire him 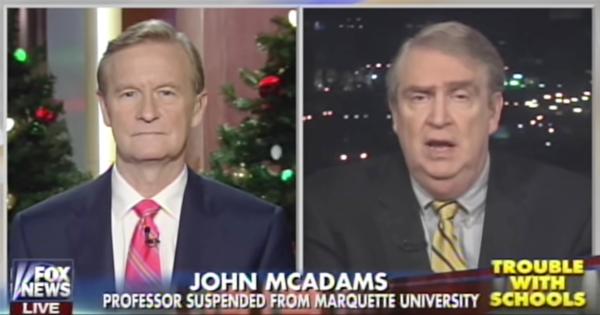 A conservative Marquette University professor may be fired for insisting on his right to free speech in response to demands that he apologize for writing a blog post.

Dr. John McAdams had been on paid suspension since December 2014 over a blog post he wrote criticizing another instructor, Cheryl Abbate, for telling students not to dispute the propriety of gay marriage because it would be “homophobic” to express opposition to the idea.

“If you fire me for failing to make the statements you demand, you will be committing yet another violation of the Due Process..."

Abbate subsequently received a slew of hateful and threatening messages from third-parties upset about the incident, and on March 24, Marquette President Dr. Michael Lovell sent McAdams a letter informing him that the university had decided to suspend him—with benefits, but without pay—until January 2017, claiming the blog post violated Marquette’s guiding values. The letter also demanded that McAdams make a public apology and admission of guilt, giving him until April 4, just 10 days later, to do so.

Lovell followed that up last week with a public statement explaining why he decided not only to suspend McAdams, but also to make his reinstatement contingent upon a public apology, saying that as a “direct result” of “actions [McAdams] took to publicly shame one of our graduate students,” Abbate was subjected to a stream of vitriolic comments, several examples of which he includes to underscore the severity of the issue.

“Constructive dialogue and vigorous debate cannot exist when our discourse is so degraded,” Lovell declares. “I’m not under any illusions about deplorable behavior on the Internet … but what’s at issue here is a professor inflicting this type of personal attack on a student. That is simply unacceptable.”

In the concluding paragraph, however, Lovell asserts that he is “not asking for Professor McAdams to be responsible for all the vitriol from the lowest of the Internet,” but merely that he display “common human decency toward members of our own community.”

McAdams responded Monday with a lengthy letter reiterating his refusal to offer a coerced apology, as well as defending his own conduct in writing the blog post and claiming that Lovell misrepresented the situation by describing Abbate as a student.

“You describe that [March 24] letter as asking me to ‘take responsibility for [my] actions and show some remorse for what [I] put our student through’,” McAdams notes. “However, what I did was write a blog post about the way in which an experienced instructor—an employee the university placed in a position of authority—mistreated an undergraduate student.”

McAdams then disputes the assertion that he is not being held responsible for the behavior of internet trolls, pointing out that Lovell had referred to “a professor inflicting this type of personal attack on a student” earlier in the same statement.

“By conflating my criticism of the way Ms. Abbate, as an instructor, treated an undergraduate student with the personal attacks launch by ‘the lowest of the internet,’ you are asking me to be responsible for those attacks,” he tells Lovell, adding, “you know I had nothing to do with them and that I have expressed regret that Ms. Abbate was subjected to them.”

Offering to condemn the harassment using any adjective Lovell deems sufficiently indignant, McAdams submits that had he known in advance that she would face such attacks, he “might have taken the extraordinary step of not identifying her” in his post, but maintains that he had no reason to expect such a response.

McAdams also asserts that Lovell misrepresented the Faculty Hearing Committee report on the university’s investigation of the matter by neglecting to mention that the report had also concluded that the “summary suspension of me in December 2014 and ‘banishment’ of me from campus violated the Faculty Statutes and denied me due process,” as well as by imposing a harsher punishment than the Committee recommended.

[RELATED: Fate of Marquette prof could hinge on opinions of adversaries]

“If you fire me for failing to make the statements you demand, you will be committing yet another violation of the Due Process and the academic freedom provisions of the Faculty Statutes,” McAdams writes in conclusion. “Unless you rescind your demand … by April 14, 2016, I will assume that you mean what you say and that is precisely what you intend to do.”

Campus Reform reached out to Marquette for a response to McAdams’ letter, but university spokesperson had not responded by press time.