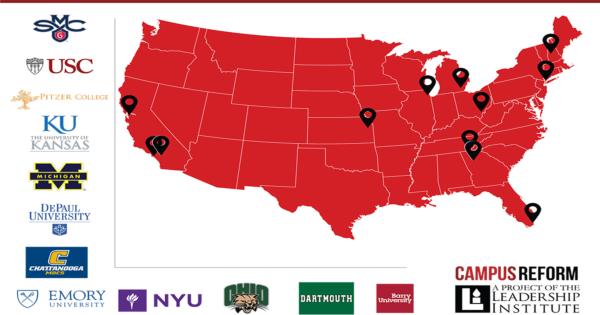 A campaign calling on students to write pro-Trump chalk messages on college and university campuses across the country, "The Chalkening," has done a great deal to expose the extreme sensitivity that pervades American higher education. “Triggered” by such troubling communiques as “Trump 2016” and “Build The Wall,” students have reported the chalkings to police, Student Governments have offered counseling to the “victims,” and administrators have taken steps ranging from condemning the messages to banning political chalking entirely.

Campus Reform has compiled the following twelve examples highlighting the extent of the hysteria that has gripped some schools at the mere mention of Trump’s name.

Administrators deemed Donald Trump’s campaign rhetoric antithetical to the school’s values, and responded by banning the golf team from practicing at the world-class Trump Doral course.

In response to Trump-inspired chalk messages left by members of College Republicans, administrators banned all chalking on campus, ostensibly to preserve political neutrality.

A professor published an op-ed in HuffPost calling Trump’s views “fascist” and asserting that his supporters are the “least educated segment of the population.”

The school’s Director of Medical Ethics co-authored an op-ed comparing Donald Trump to Adolf Hitler based on his “racist rhetoric.”

After refusing to allow Trump to speak on campus, claiming the venue is not open to political candidates, Hillary Clinton was permitted to hold a campaign event in the very same auditorium.

Even an incomplete Trump slogan was enough to trigger panic at Pitzer, where the phrase “Make America” prompted administrators to issue statements condemning the “hate filled message.”

A student senator faced calls for her resignation after colleagues learned that she had participated in pro-Trump chalkings on campus.

A former student senator took umbrage at Trump chalkings on campus, expressing outrage on social media after the university failed to condemn the messages sufficiently.

Student Government released a statement sympathizing with the “genuine concern and pain” caused by pro-Trump chalkings, after which students held a rally to voice their “fear.”

Vandals repeatedly defaced Trump bumper stickers on one student’s car, scribbling over Trump’s name in one instance and covering it with a “Hitler” decal in another.