Disgraced ex-Mizzou prof.: I was fired because I'm white 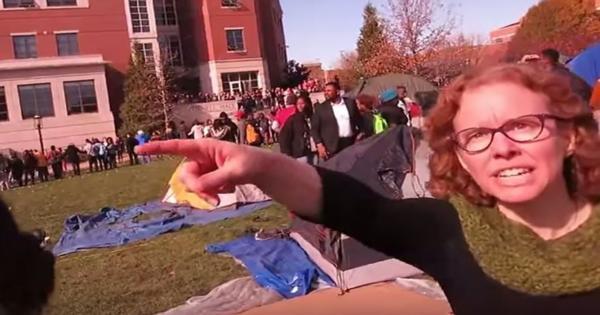 Former University of Missouri (Mizzou) professor Melissa Click, who assaulted a student journalist during a November protest, is now claiming she was fired because she is white.

“This is all about racial politics,” she said in a profile published in The Chronicle of Higher Education. “I’m a white lady. I’m an easy target.”

"[W]hen it got out of control, I was the one held accountable."

[RELATED: Mizzou prof. says Click was fired because white men are mad at ‘women who speak up’]

Click added that Mizzou’s administration is using her to distract attention away from student protesters and their demands.

“Everything she has come to stand for since the video came out—intolerance, anger, mouthiness, dismissiveness—is exactly the opposite of who she says she really is,” The Chronicle reports. “Focusing on her behavior, she says, is a way to take attention away from the demands of Concerned Student 1950, the group of protesters.”

She then went on to say that she was simply trying to do what was right and made a simple mistake along the way.

“I’m not a superhero. I wasn’t in charge. But when it got out of control, I was the one held accountable,” she said. “I am a woman who made mistakes trying to do what she thought was right.”

Prior to her involvement in the November protest, Click participated in a shutdown of the school’s homecoming parade, during which she berated a police officer who tried to move her to the side of the road. A recording from the officer’s body camera revealed that Click told the officer to get his “fucking” hands off her, ultimately leading to her termination.

[RELATED: Mizzou prof. under ‘review’ after video of her berating police surfaces]

She continues to insist, however, that both instances were simple mistakes and has proffered several excuses for her behavior. Earlier this year, shortly after she was fired, Click told private investigators she thought the student journalist was carrying a gun. Missouri, though, does not allow concealed weapons on its college campuses and when confronted with the full report of her investigation, Click backed down from her claims.

[RELATED: Mizzou Board says no to Click’s termination appeal]

Click later argued that she was fired to appease conservative lawmakers and silence black voices.

“In their decision to terminate my employment, the Curators bowed to conservative voices that seek to tarnish my stellar 12-year record at MU,” Click wrote in statement. “But their termination of my employment will not remedy the environment of injustice that persists at MU.”

The Board of Curators fired Click in February with a 4-2 vote.