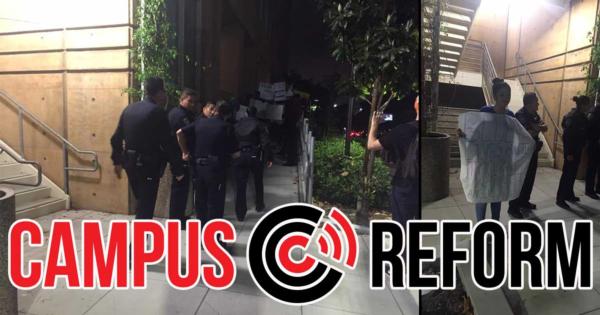 An event held by a Jewish student group at the University of California, Irvine was disrupted Wednesday night by a crowd of Muslim students chanting anti-Semitic and anti-police slogans.

Ariana Rowlands, president of the College Republicans club at UCI, told Campus Reform that her group had just wrapped up its weekly meeting Wednesday night, and were gathered outside the building preparing to hang posters advertising an upcoming appearance by Milo Yiannopoulos when they heard a commotion nearby.

Wandering over to investigate, the CR members encountered a large group of students—Rowlands estimated there were perhaps 50 in total—holding signs and screaming in unison to protest a movie screening being held by Students Supporting Israel (SSI).

Shawn Steel, a Republican National Committee member who was on campus to address the CR meeting, posted a video on Facebook depicting a portion of the demonstration.

“Intifada, Intifada/long live the Intifada,” the protesters shout at the start of the video, following that up with a call-and-response chant of “displacing people since ‘48/there’s nothing here to celebrate!”

They repeat the rhyme several more times before progressing to a simpler message: “Fuck the police!”

Kevin Brum, Vice President of SSI, told Campus Reform that the demonstrators were members of the Muslim Student Union and Students for Justice in Palestine groups, who were apparently incensed that two former Israel Defense Forces (IDF) soldiers were planning to meet with attendees at the screening.

“The film was Beneath the Helmet, a film about IDF soldiers with personal interviews that sort of humanizes them,” he explained. “One of the campus advisers for Hillel is an Israeli citizen who served in the IDF, so she has former IDF friends, and two of them stopped by. Someone posted that information on Facebook, and SJP and MSU got wind of it.”

The SJP confirmed that account in a Facebook post taking credit for its role in the protest, saying the behavior of its members was justified because “the presence of IDF and police threatened our coalition of Arab, black, undocumented, trans, and the greater activist community.”

Rowlands captured much of the protest on video, as well, and while darkness obscures most of the signs, the protesters’ continued chanting comes through clearly.

“Black lives/they matter here,” they chant in one of the clips, incongruously adding, “when people are occupied/resistance is justified.”

In another clip, the protesters yell “hey hey, ho ho/the IDF has got to go,” which they later revised to demand that “UCI PD has got to go.” In between, they break up the repetition with a chant of “hey, you settlers, you can’t hide/we charge you with genocide.”

Rowlands told Campus Reform that police officers showed up to ensure that the scene remained orderly, and according to a post on SSI’s Facebook page, the officers later escorted the attendees away from the event “for their own safety,” though only after allowing them to conclude the film. 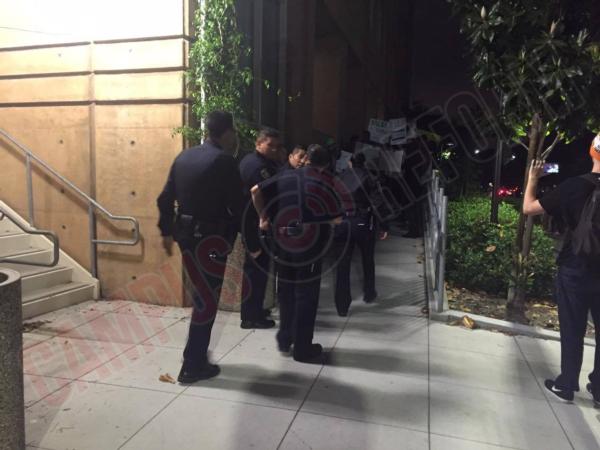 “The police said the protesters have a right to be there, so for our safety we were the ones who had to leave,” Brum confirmed, noting that the officers were not on hand at the start of the event, showing up only after one SSI member was allegedly chased from the venue by the protesters and called the police after taking refuge in a different building.

A spokesperson for Hillel International, which had a representative on hand at the event, elaborated on the officers' involvement, saying that while the protest was allowed to continue outside the venue, one officer was stationed inside to ensure that the SSI students could complete their program without interference.

Once the film was over, the officers moved the protesters to an area out of sight of the doorway to the theater, then escorted the students to their cars.

Braving the aggravation of the demonstrators, the CR members at one point attempted to engage with them, bringing over the signs they had been planning to post featuring provocative Yiannopoulos quotations. 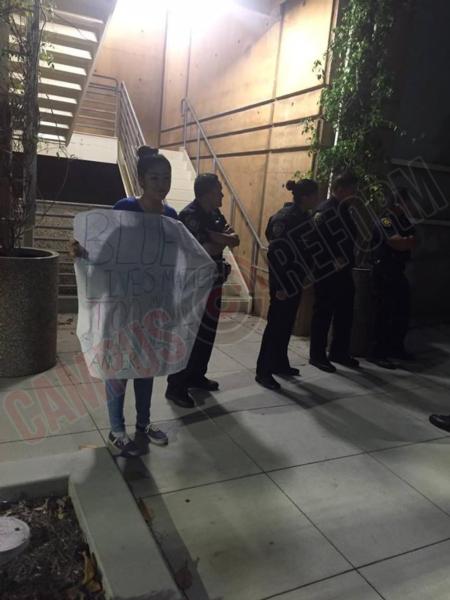 “Black Lives Matter exists only to wallow in victimhood & break things,” reads the quote on one sign. “Blue lives matter, too,” another states, along with the now-infamous quip “social justice is cancer.”

“We brought some ‘blue lives matter’ posters, but the protesters didn’t seem to have any interest in opening up a dialogue,” she recalled, claiming they simply shouted over every attempt to initiative a conversation about their grievances.

Rowlands readily acknowledged that the students who disrupted Wednesday’s event are entitled to the same free speech protections as everybody else, but said their behavior in this case rose to the level of harassment.

“SSI at UCI is a nice, friendly group. They just want to peacefully assemble and they keep getting harassed,” she declared indignantly. “The Left says ‘hate speech’ makes them feel unsafe, but then they go out and do things like this, which actually make people feel physically unsafe.”

Brum told Campus Reform that he has shared his concerns about the protest with the UCI administration, saying, “the Muslim Student Association was disbanded for shutting down the Michael Oren event, and I don’t see how this is any different.”

Spokespersons for UCI provided the following statement from Chancellor Howard Gillman to Campus Reform, which was also sent by email to the entire UCI community:

"Last night, an incident occurred on campus that we believe crossed the line of civility, prompting me to re-emphasize our position on free speech, safety, and mutual respect.

"The incident centered on a film-viewing event sponsored by Students Supporting Israel. A group of protesters reportedly disrupted the event, blocking exit paths. Participants feared for their safety, calling on our police for assistance.

"While this university will protect freedom of speech, that right is not absolute. As I mentioned in a campus message at the beginning of the academic year, threats, harassment, incitement, and defamatory speech are not protected. We must shelter everyone's right to speak freely—without fear or intimidation—and allow events to proceed without disruption and potential danger.

"We are thoroughly analyzing all reports and information regarding this incident and investigating whether disciplinary or legal actions are appropriate.

"The month of May is filled with cultural celebrations and remembrances that highlight the diversity of this brilliant campus. Please respect your colleagues' right to recognize their heritage and express opinions in a safe environment."

"We cannot allow Jewish students to be intimidated, threatened or harassed when they exercise their rights to assemble for student programming," Hillel President and CEO Eric Fingerhut said in a statement. "Hillel is committed to freedom of speech and freedom of expression for all students. This includes the students who peacefully gathered to watch a film yesterday."