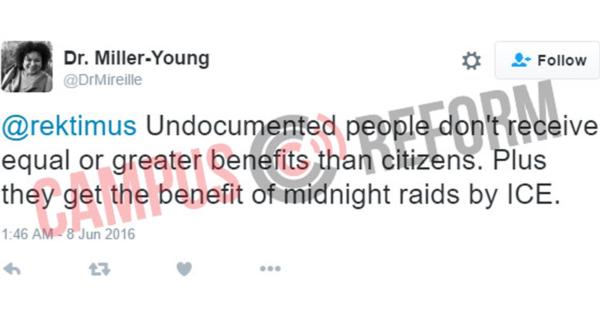 In a series of tweets, a University of California, Santa Barbara (UCSB) professor endorsed free education for illegal immigrants (and everyone else), said the military could fund education, and suggested that changing the system sometimes involves subverting it.

Dr. Mireille Miller-Young, an associate professor of Feminist Studies at UCSB with expertise in areas including pornography and black cultural studies, made headlines in March 2014 when she snatched a sign depicting a fetus from pro-life students and declared the student a “terrorist.”

"US colleges should be free for all. It only makes us stronger."

She subsequently scratched a student while grabbing her arm and destroyed the sign. Miller-Young received three years’ probation for the incident.

Last Wednesday, responding to a tweet from a Twitter account by the name of “Political Talk” asking how she felt about her tax dollars funding free college for illegal immigrants, Dr. Miller-Young said “Fabulous! It’s of course not free for undocumented immigrants or anyone, but it should be.” 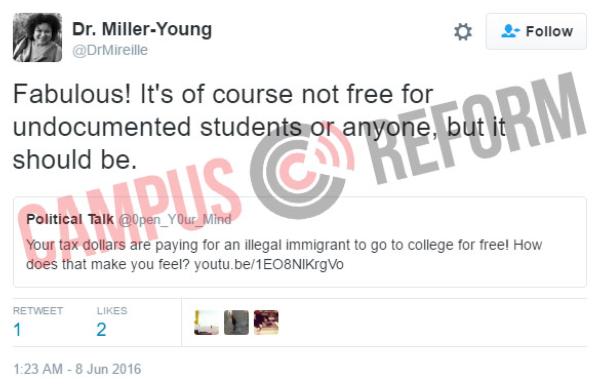 When asked to confirm her opinion even though “legals have to pay” for illegal immigrants’ tuition, Miller-Young replied “Yup it’s great. Education is the best tool to empower the disenfranchised. College should be free, paid w/ taxes.”

The doctor went on to say “most undocumented college students grew up here BTW. US colleges should be free for all. It only makes us stronger.”

Another user stated that if the one-percent leave the country, the two-percent take their place, but added that “moving out of the country doesn’t mean you don’t pay taxes, renouncing citizenship does.”

Miller-Young replied with “Right! Besides the 1% already offshore most of their wealth to avoid taxes and pay less of a share than you or me….Undocumented people don’t receive equal or greater benefits than citizens. Plus they get the benefit of midnight raids by ICE….Sometimes to change the system you need to subvert it. But how is college access for undocumented students subverting the system?”

[RELATED: Millions in scholarships for children of illegals sit unclaimed in California]

“Imagine how strong our economy would be if no one had college debt,” Miller-Young continued. “Time to rethink the system.”

When Political Talk opined that “if you want free college you should earn it! Straight A’s!,” Miller-Young replied “funny you pointed that out. Undocumented students who earn college scholarships are A+ students.”